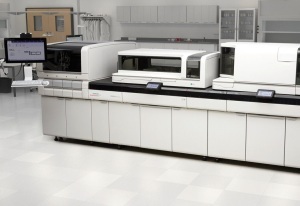 Siemens will distribute up to 120 Atellica Solution immunoassay analyzers across 19 labs in the U.S.
Siemens Healthineers has won its bid to be the primary supplier for Quest Diagnostics Immunoassay Testing with Atellica.

The German healthcare giant will provide up to 120 Atellica Solution immunoassay analyzers — the largest deployment to date worldwide — to 19 esoteric and core laboratories under Quest in the U.S. It will also supply the technology to a new flagship Quest lab in Clifton, New Jersey.

"It is of great interest to laboratory providers to be able to consolidate suppliers and reduce the number of instruments required to operate, to reduce maintenance costs, without sacrificing the ability to grow their laboratory's operations long-term," Deepak Nath, president of laboratory diagnostics at Siemens Healthineers, told HCB News. "Leveraging the unique features and broad assay menu the Atellica Solution offers, Quest will be able to increase its immunoassay testing volume and improve turnaround time concurrently."

The Atellica Solution’s modular design allows Quest to increase its immunoassay testing volume and improve turnaround time concurrently. It applies intelligent sample routing to leverage patented, bi-directional magnetic sample transport technology for efficient sample management, while the immunoassay analyzers offer precision, throughput and turnaround time of up to 440 tests per hour, the industry’s top productivity per square meter. In addition, the solution provides onboard QC storage and has a dual-well reagent design of the Atellica chemistry reagent pack, with the ability to load reagents on the fly, helping to lower the total operating costs of a laboratory.

The supplier agreement builds on a previous partnership between Siemens and Quest that oversaw the first installation in the U.S. of Atellica Solution immunoassay and clinical chemistry analyzers with Aptio Automation at Access Medical Laboratories in Jupiter, Florida.

There was, however, concern in early 2019 over pushes to speed installation of the solution, with some fearing that it would hurt year-long profits.

"With this agreement, Siemens Healthineers went from being one of several suppliers for Quest's immunoassay testing to becoming its primary supplier. I consider this a testament to our clinical capabilities, as immunoassay testing covers some of the most sensitive, most specific tests," said Nath in a statement. "The Atellica Solution platform is not limited to immunoassay testing, however. It offers a broad menu of assays to meet laboratories' immunoassay and clinical chemistry testing needs."

The new flagship lab is set to be completed by 2021.