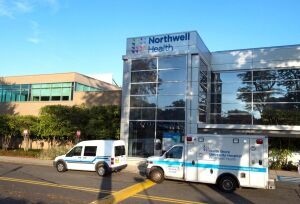 One New York health system is getting creative in its treatment of patients infected by the ongoing COVID-19 pandemic.

The hospital system says 75 percent of its ventilators are currently in use at its locations in Lenox Hill, Long Island Jewish and Staten Island University hospitals. The health system has already converted 75 anesthesia machines, which are used to sedate patients during surgery, and are using them as ventilators to help patients hospitalized with coronavirus breathe through intubation.

With the peak of the virus still weeks away, hospitals in New York, as well as outside of it, are searching for ways to repurpose other medical equipment into ventilators to meet the needs of a growing volume of patients seriously ill with COVID-19, especially those with preexisting respiratory ailments who have difficulty breathing as a result of the virus. Mayor de Blasio told city hospitals on Monday that an additional 400 hospitals were needed to handle an influx of COVID-19 patients through the end of the week, reports The Post.

New York Governor Andrew Cuomo has urged President Donald J. Trump and the federal government that the state is in need of as many as 30,000 ventilators to be ready when it reaches the peak of patients. Trump refuted this number in an interview with Fox News host Sean Hannity.

Demand worldwide has also driven up the price of ventilators from $20,000 to $50,000, making it difficult for competing states to purchase them, according to The Post. In addition, many hospitals lack personnel who are trained in using the devices.

Ventilators are not the only things in short supply. Hospitals are also facing depletions in masks and personal protective equipment. Henry Ford, for instance, has resorted to using everyday items to craft homemade masks and face shields.