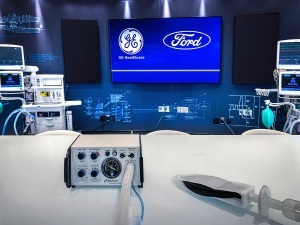 GE and Ford have agreed to produce Airon-licensed Model A-E ventilators for COVID-19 patients.
Ford Motor Company and GE Healthcare are partnering to produce up to 50,000 third-party ventilators within 100 days and 30,000 a month thereafter for patients who test positive for COVID-19.

“Our deep understanding of the healthcare industry with Ford’s supply chain and production expertise will help meet the unprecedented demand for medical equipment,” said GE Healthcare president and CEO Kieran Murphy in a statement. “We continue to be encouraged by how quickly companies are coming together in innovative ways to address this collective challenge.”

The GE/Airon Model A-E ventilator design operates on air pressure without the need for electricity, allowing for fast scale production and the ability to address the needs of most COVID-19 patients with respiratory failure and difficulty breathing. It is designed for quick setup, is easy to use, and can be deployed in an emergency room setting, during special procedures or anywhere in an intensive care unit.

The devices will initially be made at Airon’s manufacturing facility in Florida, with Ford sending a team to work with the company to boost production. The automaker plans to start production around the clock at Ford’s Rawsonville Components Plant in Michigan by the week of April 20, with 500 paid volunteer UAW-represented employees working three shifts.

The collaborative effort is the second GE-Ford partnership formed this month, with the two announcing a separate deal last week to produce a simplified ventilator design by GE Healthcare. Both efforts will help meet surging demands for ventilators around the U.S., with each meeting time, production volume and patient care requirements.

“The Ford and GE Healthcare teams, working creatively and tirelessly, have found a way to produce this vitally needed ventilator quickly and in meaningful numbers,” said Jim Hackett, Ford’s president and CEO, in a statement. “By producing this ventilator in Michigan, in strong partnership with the UAW, we can help healthcare workers save lives, and that’s our No. 1 priority.”

Like GE and Ford, Tesla has also pledged to begin ventilator production at its New York facility, along with General Motors, which has teamed up with Ventec Life Systems to produce the crucially needed devices.

GE Healthcare and Ford chose the Airon-licensed Model A-E ventilator based on consultations with medical experts.

Updates on the progression of these combined efforts will be provided.