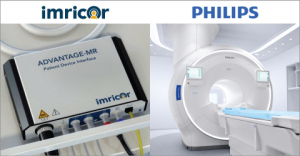 Imricor and Philips have entered a sales collaboration that will allow Philips to re-sell Imricor's Advantage-MR System in European countries where CE mark status is recognized.
Imricor Medical Systems, a provider of MR-guided ablation solutions, has struck its first-ever sales collaboration with Philips over the commercialization of its Advantage-MR EP Recorder/Stimulator System.

The deal awards Philips nonexclusive rights to resell the solution alongside its industry-leading MR scanners in European countries where CE mark status is recognized. This enables Philips to lead the drive behind interventional cardiovascular MR (iCMR) lab adoption, while allowing Imricor to focus on increasing utilization, growing its portfolio of consumable devices, and expanding its indications for use.

“The utilization of MR within cardiology has been mostly limited to diagnostic applications. Given the diagnostic yield MR provides, utilizing these labs for interventions is a logical next step,” Nick Twohy, director of marketing for Imricor, told HCB News. “Imricor is one of the first companies to offer technology that goes beyond strictly imaging within the MR environment.

Imricor products enable clinicians to conduct cardiac ablations under real-time MR guidance. The company claims to be the only one with a fully MR-conditional EP recorder/stimulator system and cardiac ablation catheters for use in the MR environment.

Receiving a CE mark in 2016, the Advantage-MR EP Recorder/Stimulator System enables physicians to use both the EP recording system and a cardiac stimulator, while ablating within the iCMR environment. It also connects tracking coils in its Vision-MR catheters to a compatible tracking interface that connects to and allows the MR scanner to track the location of these devices.

Unlike with X-ray-guided ablations, the solution’s MR component enables users to visualize soft tissues of the heart instead of having to rely on imperfect surrogates for visualization, disease analysis and therapy endpoints. This allows physicians to individualize the treatment applied to the patient depending on the state of their disease and reduce the recurrence rate of complex arrhythmias following catheter ablation.

“The Imricor Advantage MR system is an improvement over established X-ray-based image-guided therapy systems,” said Twohy. “While we are indicated for atrial flutter and diagnostic procedures today, we expect to show clinical and economic advantages over X-ray based systems as we expand into more complex procedures such as PVC and VT in the near future. This is a great time for leading cardiology programs to begin this transition, and Imricor is leading the way in this field.”

The collaboration stems from its 10-year partnership between the two, and will allow them to build new iCMR suites together and locate providers that already have access to 1.5T-compatible MR systems.