With AI, MR can be 4x faster and just as accurate as conventional scans 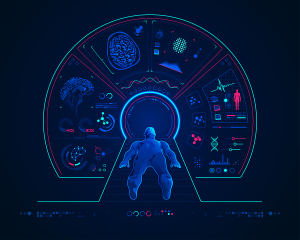 New research published in the American Journal of Roentgenology shows how the team’s AI-generated MR scans are just as effective as a traditional MR. If implemented by radiology departments, the new model could help eradicate some of the problems that young children, elderly and other patients often experience during a traditional scan, such as length of time, claustrophobia and the need to take sedatives.

“This study is an important step toward clinical acceptance and utilization of AI-accelerated MR scans because it demonstrates for the first time that AI-generated images are essentially indistinguishable in appearance from standard clinical MR exams, and are interchangeable in regard to diagnostic accuracy,” said Michael P. Recht, professor of radiology at NYU Langone and lead study author, in a news release. “This marks an exciting paradigm shift in how we are able to improve the patient experience and create images.”

The open-source project comprised 1.5 million de-identified MR knee images from 10,000 scans, and raw measurement data from 1,600 scans, from which the researchers built a neural network and trained it. This included reconstruction of views missed from underlying image structure, similar to the way people interpolate sensory information.

“MR is the gold standard imaging technology for soft tissues of the human body. However, its main limitation is the amount of time an exam takes,” Dr. Yvonne W. Lui, associate professor of radiology and associate chair of artificial intelligence at NYU, told HCB News during the team’s early research.

Now, with the assistance of AI, significantly less data is required to achieve a high-quality medical image, which means the scans can be performed much faster without compromising diagnostic accuracy. In fact, 75% of the raw data used to create a scan was eliminated.

FastMRI also shows the potential to capture information that was previously missed, which would improve patient outcomes. Research indicates the error rate among radiologic examinations is approximately 30%, with real-time errors in daily radiology practice averaging 3% to 5%, and that nearly 75% of all medical malpractice claims against radiologists are related to diagnostic errors.
1(current)
2