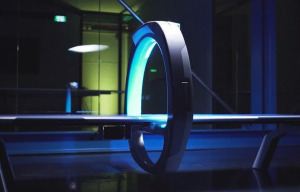 Nanox.ARC
Medical imaging startup Nanox has been making waves over the last few years, touting an innovative X-ray acquisition technology utilizing "cathode silicon" to dramatically reduce the cost of providing radiography around the world — but now the company is facing a class action lawsuit from investors following a report accusing it of making false statements about its technology.

Published September 15 by the online stock commentator, Citron Research, the report chastises the company for failing to produce any evidence comparing its Nanox.Arc, an X-ray solution in development that will be able to produce 2D and tomography scans of patients, to conventional CT scanners, as well as for its R&D spending. It also accuses Nanox of fabricating distribution agreements with fake customers.

The allegations follow the launch of Nanox’s IPO (NNOX) in August, which raised $165.2 million on the first day of trading. Shares were trading at $66.67 by September 11th, two days after the company announced a deal to bring 630 units to Mexico, but have dropped to $28.60 as of today.

“There is not one scientific paper or submission that would back up any of these claims,” according to the Citron report, which described the company’s claims as a "farce". “As a matter of fact, we have not even seen proof of the product and have only seen a mock-up drawing of what this machine is supposed to look like.”

Nano-X Imaging has rejected the allegations, claiming the Citron report makes “factual errors and misleading speculations” about its business activities. “Nanox believes that the allegations in the report are completely without merit and strongly condemns the publishing of the false and misleading information contained in this report," according to a statement from the company.

The Citron Research report criticizes the company’s description of the product as “novel” and “innovative,” when it has only reported $7.5 million in R&D spending since its founding in 2018. It also points out that the company filed a 510(k) application for its product, indicating the technology is similar to previously cleared devices already on the market.

Both the Citron report and a second one published by short-selling firm Muddy Waters question the partnerships Nanox claims to have formed for the distribution of its Nanox.Arc system.

“Almost all of the company’s partnerships give reason for skepticism,” said the Muddy Waters Report. “A U.S. AI partner has apparently not received any ARC images, despite requesting them for six months. By contrast, we used our stock promotion imaging technology (a camera) to find evidence that the purported South African distributor expected to annually purchase $15.5 million from NNOX is incapable of doing so.”

The reports have motivated the the Rosen Law Firm to file a class action lawsuit on behalf of investors in Nano-X Imaging, accusing the company of making false and misleading statements and failing to disclose that:

(1) Nano-X’s commercial agreements and its customers were fabricated
(2) Nano-X’s statements regarding its “novel” Nanox System were misleading, as the Company never provided data comparing its images with images from competitors’ machines
(3) Nano-X’s submission to the U.S. Food and Drug Administration (FDA) admitted the Nanox System was not original
(4) as a result, defendants’ public statements were materially false and/or misleading at all relevant times. When the true details entered the market, the lawsuit claims that investors suffered damages.

Other law firms such as Faruqi & Faruqi and Wolf Haldenstein Adler Freeman & Herz LLP are also encouraging investors who believe they have been wronged by Nano-X to also contact them about seeking legal action against the company.