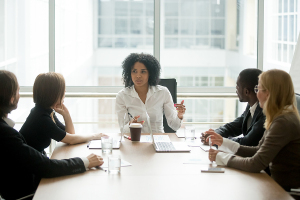 Confidence among CEOs in the future of healthcare, the economy and other areas have dropped sharply following the election of Joe Biden as the next president of the United States.

Despite a majority predicting their firms will see financial improvement in the coming months, the outlook of the business environment among CEOs over the next 12 months fell 6.4% this month, to a 6.4 on the 1-10 scale of the November CEO Confidence Index, the largest survey of chief executive officers in America, by consulting firm Chief Executive. Confidence in the current business environment rose 1% from 5.8 in October to 5.9 on the scale.

“Things are likely to get worse before they get better, given the obstacles being put in the way of a smooth transition,” said Peter Altschuler, president of global marketing firm Wordsworth & Company, regarding the change in presidency.

Many CEOs gave the economy in 2021 a negative rating due to fears of increased taxation and renewed COVID lockdowns under Biden. Despite these concerns, many were enthusiastic about the new year. “Jobs will increase, and consumers will start spending a lot more,” said Prasad Reddy, CEO of footwear brand Twisted X, adding that he expects an “excellent” business landscape at this time next year, rating it a 9 out of 10, up from a 6 in the current environment.

Nineteen percent of CEOs saw health benefits strategies as the area that will be most impacted by the 2020 election results, the third highest among the 211 participants polled after tax strategies (29%) and lobbying/regulation strategies (21%).

The majority of CEOs (58%) said that the main focus of the new administration should be on developing a treatment for COVID-19, followed by 24% who said it should focus on the economy and jobs. Only 3% said healthcare should be its main priority.

Confidence in future business conditions for healthcare, along with real estate, plummeted by 34% in November from its October status among those polled due to low occupancies, worker shortages, the increased cost of employee testing and PPE. Healthcare CEOs showed the second largest declines in confidence on a year-by-year basis at 33%, after real estate.

Fewer CEOs expect to increase their profits and revenues in the year ahead, at 54% and 64%, respectively, down from 62% and 67% in October. In addition, the proportion of CEOs that expected to increase capital expenditure over the next 12 months fell from 44% to 41%.