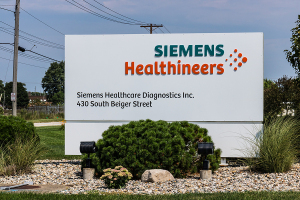 A siemens facility in Mishawaka, IN
By Imogen Fitt

Siemens Healthineers officially completed the acquisition of Varian Medical Systems on April 15, 2021. The two companies constitute a combined annual revenue of around $20 billion, and there’s little doubt that this decision will have raised eyebrows amongst competitors in the oncology segment when it was announced back in August 2020.

With the process now complete, in this article we explore how this move will shape the oncology IT landscape going forward and our expectations for the new expanded Siemens Healthineers.

Building better
Siemens and Varian have been working together since 2012, when the “EnVision” partnership was first established between the two vendors. Solutions such as ARIA connectivity, which enabled Varian’s IT networks to integrate seamlessly with Siemens discontinued linear accelerators, were co-developed. The partnership initially positioned both companies positively, by providing enhanced sales opportunities for new Varian hardware and software deals once linear accelerator replacements were due. This past familiarity should also translate to a relatively smooth transition going forward, though as ever with large corporate mergers of this scale, it will take time for the two firms to realize the benefits of the deal.

Both vendors will be keen to exploit the merger allowing Varian access to Siemens’ much larger operational and sale networks, particularly a broader reach across emerging markets where Siemens already has an established presence, especially in emerging Eastern Europe, Middle East, Africa and Asia Pacific markets. In more established markets, the firms are also complementary, with little overlap of Siemens’ own installed base of established customers across Europe and Varian’s strong customer base in the U.S.

Establishing a cancer care continuum
The combined Siemens-Varian oncology portfolio now encompasses most of the oncology IT workflow for providers (click image below to enlarge). 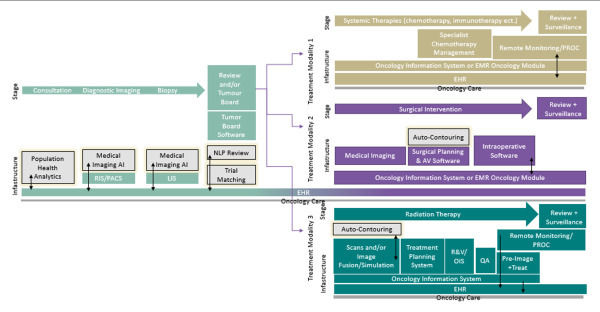 Although a few larger enterprise products are missing (LIS, EHR) Siemens-Varian now possesses broad coverage and knowledge across a range of IT products, which also allows further chances for development across several markets. Further, Siemens still retains a strong relationship with Cerner, one of the leading global EMR vendors, following the spinoff of its Soarian EMR to Cerner in 2014.
1(current)
2
3
4
5