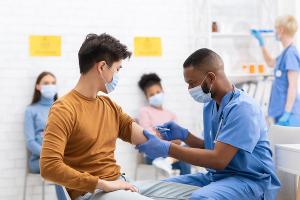 More than 170 Houston Methodist employees have been suspended without pay for two weeks after not complying with the hospital’s COVID-19 vaccine requirement.

“The small percentage of employees who did not comply with the policy are now suspended without pay for the next 14 days," Houston Methodist PR manager, Gale Smith said, according to Click2Houston. "We won’t have the final numbers for two weeks as employees can still get vaccinated with their second dose or with the one-dose Johnson & Johnson vaccine."

The lawsuit was filed on May 28th in District Court, alleging that Houston Methodist’s vaccine policy compels its employees to receive an “experimental mRNA gene modification injection” in violation of the Nuremberg Code, a collection of ethical principles prescribed in the aftermath of WWII in response to horrific revelations of Nazi medical experimentation.

“Time to take a stand! It is an honor to represent 117+ men and women of courage. Methodist Hospital employees sue over vaccine requirement, citing violation of Nuremberg Code,” Mr. Woodfill wrote on Twitter June 2.

Although the Nuremberg Code has not been adopted under U.S. law, much of its ethical tenets form the basis for Title 45 Part 46 of the Code of Federal Regulations, which prescribe policy for the protection of human subjects in medical experimentation.

In a statement released on the same day that the lawsuit was filed, the U.S. Equal Employment Opportunity Commission broadly acknowledged the legality of such employment policies.

“Federal EEO laws do not prevent an employer from requiring all employees physically entering the workplace to be vaccinated for COVID-19, so long as employers comply with the reasonable accommodation provisions of the ADA and Title VII of the Civil Rights Act of 1964 and other EEO considerations," the commission said.

Title VII of the Civil Rights Act requires that employers provide reasonable accommodations for religious objections, but the burden on hospitals when it comes to accommodating an employee's religious exemptions to vaccines may be quite low.

A 2016 case, Robinson v. Boston Children’s Hospital, involved a member of emergency room staff who sought a religious exemption for having to receive the flu vaccine while still maintaining her position, which involved significant patient interaction.

Given the hospital’s substantial interest in protecting its patients from the flu, the court concluded that such an exemption would constitute an undue hardship on the employer and is therefore not required under Title VII.

As reported by the Washington Post, the lawsuit filed against Houston Methodist appears largely to be a replication of a virtually identical legal strategy recently used in a series of similar lawsuits brought by the firm Siri & Glimstad, a New York based firm that appears to be operating with the support of a network of large anti-vaccination interests.