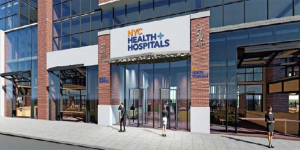 The healthcare system requested roughly $900 million from the agency in October 2020 but was only granted $260 million, with FEMA saying the sum requested included additional operation expenses unrelated to the pandemic.

Senate Majority Leader Chuck Schumer (D-N.Y.) and Rep. Ritchie Torres (D-N.Y.) rejected this reasoning and following months of political pressure from both congressmen and their colleagues, the Biden administration and FEMA agreed to reverse the decision and provide an additional $620 million, reports The New York Daily News.

Mayor Bill de Blasio, in a press conference held outside the hospital's Bronx Lincoln location on Wednesday, thanked both for their efforts in securing the funding. Both were in attendance at the conference. “We believed our federal government would be there, but we now know the money wouldn't have been there if it wasn't for Senator Chuck Schumer and Congressmember Ritchie Torres. They saved the day."

At the conference, Schumer remarked that the hospital was owed the money after it expanded bed capacity to manage overwhelming demands of the pandemic in the Spring of 2020. “During COVID, these folks went all out. This hospital system stood tall.”

Torres said that “bureaucratic reasoning” led the agency to ignore “the reality that we all saw,” according to The Daily News. Both said that FEMA’s reasoning for denying most of the funding did not make sense as there was no way for NYC Health + Hospitals to distinguish its regular operations from its COVID-19 operations during the peak of the pandemic.

NYC Health + Hospitals is the largest public hospital group in the city, according to News 12 Bronx, and oversees 11 hospitals.

The reversal by FEMA brings total funding to $880 million. This covers almost the entire amount requested, reports Becker’s Hospital Review. The healthcare system told FEMA this week that additional expenses could bring the total to about $1 billion, according to Schumer’s office.
1(current)
2