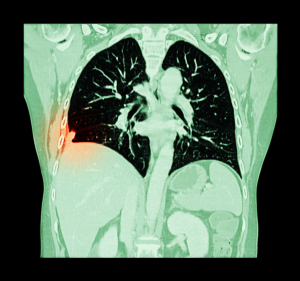 Under the new guidelines, which were published earlier this year, lung cancer screening CT should start at age 50 for those with a smoking history of 20 pack-years (one pack-year is equivalent to smoking an average of one pack per day for a year). Prior to this, screening was recommended starting at 55 in those with a history of 30 pack-years, as per the 2013 USPSTF recommendations.

The study estimated that the updated recommendations would increase lung cancer diagnoses by 30%, compared to the previous recommendations. Screening eligibility was also extended to 18,533 more people, an increase of 53.7%, Debra Ritzwoller, senior investigator at the Kaiser Permanente Institute for Health Research in Colorado and lead author of the study, told HCB News. "Cancer statistics from NCI's Surveillance, Epidemiology, and End Results Program demonstrates that Blacks/African Americans have higher lung cancer death rates than other racial and ethnic groups. Other studies related to smoking patterns have found that a larger percentage of women and Blacks/African American smokers are diagnosed with lung cancer, compared with male white smokers that have smoking histories below the 2013 USPSTF 30-pack-year eligibility cutoff."

She adds that health disparities in cancer diagnosis, risk and outcomes are influenced by a complex number of factors, including social economic status and opportunities, social determinants of health, behavior, biology, and genetics.

Ritzwoller and other researchers who took part in the national, multi-institutional study assessed data from more than 340,000 individuals. Among newly eligible individuals, 52% were women. For race and ethnic minority groups, 69.7% more non-Hispanic blacks were eligible for screenings, as were 67.4% more Hispanics; 60.6% more Asians, Native Hawaiians or Pacific Islanders; and 49% more non-Hispanic white groups. The proportion of individuals with the lowest socioeconomic status also rose by 61.1%.

The study relied on real-world patient data from electronic health records of patients who received care between January 2010 and September 2019 from five diverse community-based health systems. Only those with complete smoking history available and who had sought care from one of the five health systems for 12 or more continuous months were included in the study.

"We believe that key next steps are associated with finding effective and impactful methods to reduce barriers to the uptake of lung cancer screening access for individuals at highest risk for lung cancer," said Ritzwoller.

Despite delays and cancellations brought on by the pandemic, lung cancer screenings are rising. A study in August found that 19 states saw increases in LCS screening rates before and during the pandemic, though the lack of a decline could be possibly due to the already low rate of LCS exams prior to the pandemic, which was recorded at 5% to 6% in 2018, said the authors of that study.