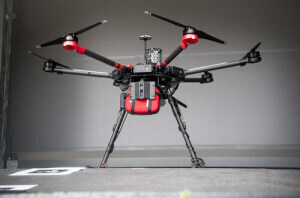 A drone sped to the rescue of a Swedish patient in cardiac arrest in December 9, 2021 — and the AED it delivered helped save the 71-year-old man's life.

The stricken man collapsed in his driveway and Dr. Mustafa Ali, a passerby, saw him and called 112 (Sweden's 911). “Just minutes later, I saw something flying above my head. It was a drone with a defibrillator,” said Ali, in a press release.

The lifesaving maneuver is a next step for the group's AED drone delivery work; reported on by Karolinska researchers at ESC Congress 2021.

"This is an excellent real-world example of how Everdrone's cutting-edge drone technology, fully integrated with emergency dispatch, can minimize the time for access to lifesaving AED equipment," noted Everdrone CEO Mats Sällström. His firm's service can currently reach 200,000 residents in Sweden and is expected to expand to more locations in Europe during 2022.

Everdrone's defibrillator delivery system is just one of a number of new drone applications entering the healthcare space.

In March 2021, researchers at the University of Cincinnati developed a telehealth drone, a semiautonomous prototype able to make house calls — big enough to hold medicines and supplies, yet small and maneuverable enough to makes its way around a patient's home.

And in a recent update, Manish Kumar, professor of Mechanical Engineering at the University of Cincinnati, told News4Jax, “That’s very, very challenging from a technology point of view because once you go inside people’s homes, you lose connection with the GPS.”

Drones have been used to deliver healthcare supplies to patients as well. In 2019, CVS teamed up with United Parcel Service, creator of the U.S.’ first fully certified drone airline, UPS Flight Forward, to deliver its drug prescriptions to patients via drones. Around the same time, FedEx was testing drone deliveries with Google's Wing, along with Walgreens.
1(current)
2