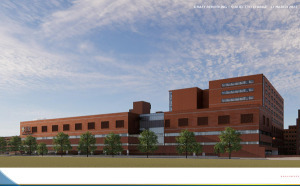 The hospital will build more than 200 examination/treatment and patient observation stations, in phases, into the Strong ED and Comprehensive Psychiatric Emergency Program. The expansion will be the most significant undertaken by the hospital system for emergency patients since 1975, when its most current patient tower was built.

The ED addition will include a fast-track section for patients with less serious matters who can be treated and discharged faster, while the Comprehensive Psychiatric Emergency Program’s space will more than double, according to the Democrat & Chronicle.

The hospital is also adding over 100 private inpatient rooms in a new nine-story tower. Demolition is set to begin this summer, with construction starting in 2023 and expected to be completed in 2027. “Upon completion, the new tower will be one of the most advanced treatment facilities in the world for patients with cardiovascular disease,” said Dr. Mark Taubman, CEO of URMC, in a statement.

The new building will have four dedicated cardiovascular floors, with clinical space for patients with heart and vascular disease, as well as intensive care and private rooms. The hospital says combining these services will improve efficiency and make access to care more convenient. The floors in the existing tower will be renovated as well at the beginning of construction.

The expansion will take place west of the current Elmwood Avenue entrance and will include a new parking garage that will be built adjacent to the existing one on the east side of the entrance. The new garage and the minor demolition of loading docks raises the total cost to $641 million.

Strong’s emergency department opened in 2001. Like other local hospitals, it has struggled following the closures of St. Mary's and Genesee hospitals two decades ago. It is also the only upstate hospital that provides a full continuum of care and is the latest of Rochester’s hospitals to undergo a major expansion. Others include Highland Hospital, where work is still ongoing, and Rochester General, which opened its expansion in late 2020.

In 2017, Strong expanded its Golisano Children's Hospital Tower, which is now 245,000 square feet. The current project will be more than twice that size. Ballinger Architects, which designed the Golisano Children’s Hospital tower, will also oversee the designs for the Strong project.

“The result will be a fully modernized hospital for the needs of UR Medicine patients today and well into the future,” said Steven Goldstein, chief executive officer and president of Strong Memorial and Highland hospitals.

The Strong project has been in the works for years and is still awaiting approval from the University Board of Trustees and New York state Department of Health.