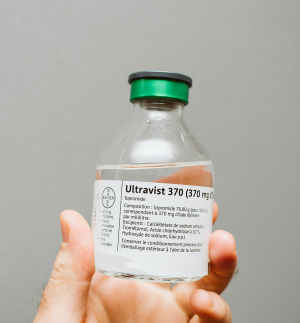 COVID-19 lockdowns forced GE Healthcare in March to shut down its Shanghai facility where several contrast media are manufactured, leading to a nearly 80% drop in available supply. While the site has since reopened and is operating at full capacity, organizations should still expect “some ongoing reduced availability of iodinated contrast media as we continue to restabilize global supply,” said GE in its most recent update on July 15.

Used in intraveneous procedures, Ultravist (iopromide) is often paired with CT and X-ray exams such as angiography. The contrast agent is manufactured at the same site in Germany as Ultravist intended for U.S. markets. Because it is not going to be distributed in the U.S., it lacks FDA-approved labeling.

“In response to iodinated contrast media shortages, due to supply pressures resulting from COVID-19 lockdowns in China, Bayer has engaged with the United States Food and Drug Administration to import and distribute a limited quantity of Ultravist (iopromide) stock which was originally intended and labeled for foreign markets,” said Bayer in a statement.

GE is the largest supplier of contrast media for the U.S., making shortages there hard on providers. Initially expected to end by late June, organizations like the American Hospital Association are concerned that they could last until September. Many providers have resorted to using alternative imaging modalities to preserve contrast supply for the most crucial needs.

One modality that has increased in use is MR. But this has only further affected the supply chain, said Mike Schiller, of the Association for Healthcare Resource & Materials Management, in a statement. "As a result of the contrast media shortage, we are hearing of healthcare systems shifting essential CT scans to MRs when an MR is an appropriate alternative. This has created an unexpected increase in demand for gadolinium, the contrast agent used for MR procedures."

To combat the shortage, GE has increased production of ICM products at its manufacturing facilities in Cork, Ireland, and is shipping products by air rather than sea from both facilities to speed up deliveries.

No updated time frame for when the shortages will end has been announced.