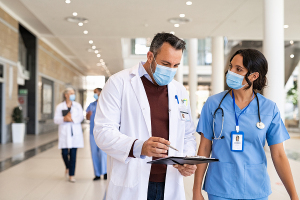 As in previous years, megamergers continued to be more frequent, with the high percentage resulting in a historically high average smaller party size with an annual revenue of $852 million. This was $200 million more than last year’s historic high of $619 million, according to Kaufman Hall’s 2022 M&A in Review: Regaining Momentum Report.

Kaufman Hall experts said that Q4 was one of the “most active” since the COVID-19 pandemic began near the end of Q1 2020, with four of its 17 announced transactions defined as megamergers, which is when the smaller party has annual revenues exceeding $1 billion. A fifth one had a smaller company with revenues ranging from $500 million to $1 billion.

“This was the third consecutive quarter in 2022 in which the average size of the smaller party across all announced transactions exceeded $800 million,” said Anu Singh, practice leader of partnerships, mergers and acquisitions at Kaufman Hall, in a statement.

The four deals and others highlighted emerging trends being seen, including cross-market transactions and academic medical centers focusing on community hospital networks.

Additionally, the lack of staff members and clinicians and depressed margins from operational and financial challenges have pushed many to search for economies of scale that offer long-term sustainability. This has often been found with large systems that demonstrated resilience during the pandemic, distributing operational risk across multiple markets and prioritizing the use of resources where they were most needed.

Experts warn that M&A activity will face challenges, including a higher interest rate environment that is raising the cost of capital and heightened regulatory scrutiny of such deals.

But they also predict that providers will continue to form partnerships and transactions that provide them with much needed resources for post-pandemic strategies, including innovating care delivery and improving their resiliency.

“While the total number of transactions remained below pre-pandemic levels in 2022, there were clear signs that M&A activity was beginning to regain momentum, and we expect that momentum to continue into 2023,” said Singh.