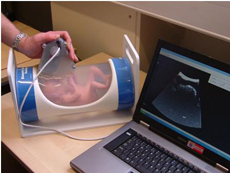 The scanner plugs into
a computer's USB port. (Credit: Newcastle)
British engineers say they've developed a low-powered ultrasound that plugs into a laptop's USB port and can be made for only $50 or $65.

The device could be useful for pregnant women in poor countries where clinics in rural areas might lack ultrasound systems, which typically cost thousands of dollars, according to the researchers from Newcastle University.

While the device is 10 to 100 times less powerful than commercial ultrasound systems, it can still provide basic but vital prenatal information, such as the position of a child in the womb, the researchers said in a press release last week.

"We hope the very low cost of this device and the fact that it can run on any standard computer made in the last 10 years means basic antenatal imaging could finally be made available to all women," Jeff Neasham, an underwater sonar expert at the school who helped create the device, said in a statement.

Neasham, who developed the system with fellow Newcastle engineer Dave Graham, said he got the idea for the device after his pregnant wife got a scan. 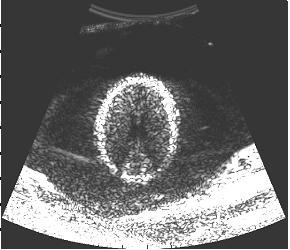 An image from the
scanner. (Credit: Newcastle)

"We realized how privileged we were to have access to this kind of care and it was my wife who suggested that I could apply my knowledge from sonar research to try to make this more affordable," he said.

Neasham said the device could also be useful for other medical applications, such as finding gallstones.

What's the future for the technology? On its website, the university said it was looking for "collaborative and/or license opportunities with a suitable industrial partner who can take the next steps of commercializing the technology."