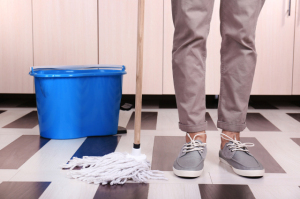 While it’s well known that 1 in 25 patients get an infection while in the hospital, there is no good evidence of how much dirty rooms contribute to the problem. This was the surprising finding of a study conducted by a research team at the Hospital of the University of Pennsylvania.

“This is not a simple problem,” Dr. Craig Umscheid, an internist and epidemiologist who is assistant professor at the University of Pennsylvania and a member of the research team told HCB News. “But it was surprising to find that there is a lack of good comparative studies that were patient-centered, that examined different approaches for cleaning patient rooms.” He said that such studies are the norm in assessing other health interventions.

The cleanliness study, which was published in the August issue of the Annals of Internal Medicine, is more of a starting point for developing best practices said Umscheid. He suspects that room sanitation does contribute to hospital-acquired infections.

“Hospital cleanliness is not as sexy as other infection solutions, but I think we will find there is a good opportunity here to reduce infections,” he said. Umscheid, who is also the director for evidence-based practice at Penn Medicine, added that many health care workers may not understand the difference between housekeeping and environmental cleaning.

“Everyone who works in a hospital knows that we have to remove debris that are sources of infection, such as stool, blood and other liquids,” Umscheid explained. “But that doesn’t mean surfaces are free of bacteria after a room has been cleaned.” He said that new “no-touch” cleaning technologies, such as UV light and hydrogen peroxide spraying mist devices, may further eliminate bacteria that can be left behind by conventional cleaning. But even studies on conventional housekeeping have not offered much in the way of good data on effectiveness of cleaning agents.

“We have to think about how environmental technicians do the many different complex tasks to clean a room, including the agents that are used,” said Umscheid. He said the study raises many questions, including if perhaps the infection control department of a hospital should supervise the staff responsible for cleaning rooms.

The study found that hard surfaces such as tray tables, bed rails, and toilets, frequently touched by patients and health care staff, are prime sources for contaminating pathogens. According to Umscheid, one of the biggest challenges the study indicates is to better understand the extent to which these contaminants might cause infections.

“There are some exciting new technologies and methods now that can change the way we look at this problem and make improvements,” said Umscheid. “But it will require more funding of research studies.”