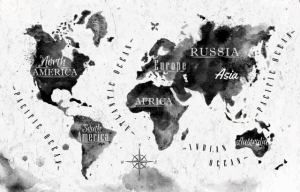 A study of deaths over the past 30 years in 49 countries finds that noncommunicable diseases such as cardiovascular disease, diabetes, respiratory disease and cancers account for two-thirds of global deaths, half of all disability, and contribute dramatically to health care costs.

“In high-income countries we are still losing the battle against obesity and diabetes,” Dr. Mohammed Ali, associate professor in the Hubert Department of Global Health at Emory University told HCB News.

“Our waistlines continue to expand, and in absolute terms, the numbers of people with diabetes continue to grow, which may be part of the reason that diabetes death rates have largely continued to increase," he said.

A second important finding is that in low to middle-income countries, deaths due to lung and colon cancers, which are related to tobacco use and poor diets, are increasing.

Noncommunicable deaths are those not caused by person-to-person transmission, but rather factors such as genetics, lifestyle choices, and access to health care to manage chronic illness conditions.

“The good news in high-income countries is that death rates are declining despite an increasing population, which suggests that people with such diseases are living longer, so doctors are doing a good job managing their patients,” said Ali.

He noted that the incidence of many cancers is headed in the right direction in the U.S. due to a reduction of tobacco use, early detection, and better treatments. Meanwhile, Japan and the Mediterranean countries had lower rates of heart disease than the U.S.

According to Ali, the study suggests several avenues of future research. For example, there is no good data to answer the question if “fat” or soda taxes or building bike lanes help change lifestyle habits to reduce noncommunicable diseases. He does believe that social media can help spread the message in middle- to low-income countries about tobacco cessation and the benefit of vaccines, but this also needs to be researched.

“There is a disparity between high-income countries and the rest of the world,” Ali explained. “The agenda is still large – the study does not indicate we have less noncommunicable diseases.” He also said that the higher rates of mortality in middle and low-income countries might also be attributed to better record keeping in recent years.

The study was published in the current issue of HealthAffairs. The research includes data from 49 countries where at least 80 percent of deaths and causes were registered in the World Health Organization’s (WHO) mortality database. The WHO database represents about half the global population.

The study did not have access to reliable data for many larger populations, such as China, India, Indonesia and sub-Saharan Africa.