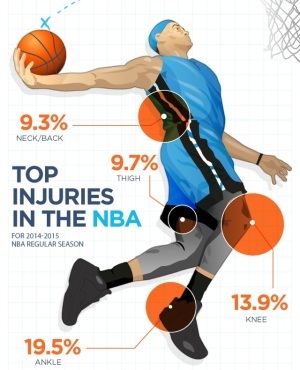 NBA Injuries Infographic
courtesy: GE Healthcare
Whether someone is a professional athlete or a weekend warrior, a new research collaboration between the National Basketball Association (NBA) and GE Healthcare could someday benefit their health and longevity.

“Sports and orthopedic injuries are an issue of global importance and impact quality of life and physical performance for millions of people around the world,” Kelly Piacsek, general manager of MR Global Hardware at GE Healthcare, told HCB News. “Orthopedics is a global health issue that affects all types of athletes as well as fitness and sports enthusiasts.”

Musculoskeletal disorders – injuries and disorders that affect the human body’s movement or muscles, tendons, nerves, discs, blood vessels and more – impact all types of athletes from 50-year-old buddies playing softball on the weekend to the 22-year-old professional athlete making millions each year on the basketball court.

“NBA players are among the best athletes in the world, and their well-being is the league’s highest priority,” Piacsek said. “So, the opportunity to study and intervene on injuries in the NBA player population will offer great insights for the NBA as well as GE in clinical protocols, technology development and player as well as employee health.”

NBA Commissioner Adam Silver and GE Healthcare U.S. and Canada President/CEO Marcelo Mosci met in 2013 at a breakfast hosted by Wisconsin Senator Herb Kohl. They discussed the concern of long-term health and well-being of NBA players. Since GE is a leading provider of diagnostic imaging equipment, the collaboration was born this July and will focus on all kinds of issues relating to ankles, knees, joints and more.

Silver, Mosci and a senior leadership team made up of executives from both companies met recently at GE’s Wisconsin offices to further discuss the next steps. The group announced a call for research proposals on tendinopathy that will be funded up to $1.5 million for researchers over a three-year period.

“Tendinopathy is a common issue not just among professional athletes but athletes of all levels who participate in sports activities and/or fitness routines in their spare time,” Piacsek said. “For example, patellar tendonitis is an inflammation of the patellar (knee cap) tendon, typically caused by overuse.”

It is typically called the “jumper’s knee,” since it is mostly commonly affects athletes who play sports where there is a lot of jumping such as basketball, track & field, volleyball or soccer. The condition can impair performance, limit playing time and potentially disrupt an athletic career.

“Through our research collaboration and call for proposals focused on tendinopathy, we hope to encourage scientists, researchers, doctors and innovators worldwide to bring their talents to this effort, accelerate the current understanding of tendinopathy injuries and improve how clinicians leverage state of the art diagnostic tools to advance the understanding, treatment and prevention of these injuries,” she said.