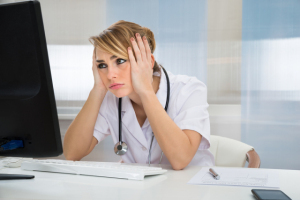 The rise of medical scribes to assist physicians with documentation was characterized as something medicine can live without at an HIMSS 2016 session entitled “Rise of the Medical Scribe Industry – Risk to EHR Advancement."

“Medical Scribes are unlicensed, unregulated and little-trained individuals who are a third party being inserted between the physicians and the medical record,” said Dr. George Gellert, regional informatics medical officer at CHRISTUS Health.

His colleague, Dr. Luke Webster, chief informatics officer at CHRISTUS Health, cited figures that by 2020 the rank of medical scribes will swell to 100,000, adding that the trend is not optimal.

Both doctors readily conceded that, to date, EHRs have not been entirely physician user-friendly. To counter the drop in productivity that EHR inefficiency creates, physicians have increasingly turned to medical scribes to perform documentation.

“Medical scribes are a workaround for doctors who do not want to deal with the EHR,” said Gellert. “But the answer is for physicians is to demand that EHR developers improve their product.”

He said the good news is that EHRs are evolving. Gellert cited the development of the cell phone.

“Remember the first cell phones? We called them a brick. They weighed three pounds, were 12 inches long, and were designed for one purpose – to make a phone call,” he said. “Compare that with the phone in your pocket right now, which is multi-functional. EHRs are developing the same way. “

He said that he had observed a demo of one vendor's EHR at HIMSS and found that many physician suggestions have been incorporated.

Webster reminded the audience that medical errors kill up to 440,000 patients a year. Patients, he said, rely on doctors to look out for their best interest.

“We need CPOE performed by physicians to protect people when they are in the hospital,” Webster said. And Gellert reminded the audience that the physician is ultimately responsible for everything that goes into a patient’s chart.

“We doctors understand that EHRs have caused frustration,” he told the audience. “Poor EHR design has a negative effect on our workflow, our income and our work-life balance.”

In response to a question, both doctors stressed they were not disparaging any physician who uses a medical scribe. Both doctors said that ER physicians, for example, who work in a very compressed treatment environment, were especially impacted by EHR inefficiencies.

But, they maintained, medical scribes are not the optimal answer to a “horrible” EHR design problem. Instead, medical staffs need to hold EHR vendors' feet to the fire to fix the design problems that frustrate doctors.