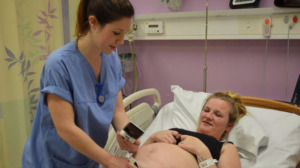 GE's Vscan handheld ultrasound
The Norfolk and Norwich University Hospital (NNUH) in the east of England has received a grant to use imaging to make childbirth safer using a hand-held ultrasound. The fund will pay for 25 hand-held scanners to find babies positioned incorrectly feet first, rather than head down.

Breech births account for between three to four percent of all births in the U.S. and the UK. Expectant mothers often have no idea their baby is in the wrong position.

"We will be scanning all the women arriving during labor and those who come in for an induction,” Jo Keable, Practice Development Midwife at NNUH explained. “Some of them can go on to give birth normally and others may decide to have a Cesarean.”

Keable said that nurses currently rely on palpation, or feel, to determine if a baby is in a breech condition, which is accurate about 70 percent of the time. But once 190 midwives are trained to use the hand-held ultrasound, she is “confident that the NNUH team can deliver a prognosis rate of any breech problems 100 percent of the time.” The hospital delivers about 6,000 babies a year.

Roy Tappin, General Manager Ultrasound UK&I for GE Healthcare, the company that produced the Vscan hand-held ultrasound being used at NNUH, told HCB News that the device can be used for a wide range of medical situations, including cardiology and critical care, as well as women’s health.

“It was designed to help enhance patient care by providing access to high-quality imaging at point-of-care, to help detect disease and complications earlier,” said Lewis. She said the device is also being used in U.S. hospitals for OB/GYN diagnosis, although the scope of the NNUH study will be published at the end of the trial.

According to the nonprofit organization FamilyDoctor.org, breech babies are more likely to be injured during birth and experience umbilical cord complications. This includes a lack of oxygen, which can cause brain damage.

“When we discover a breech early on it means a woman can speak to an obstetrician and discuss options.” said Keable.