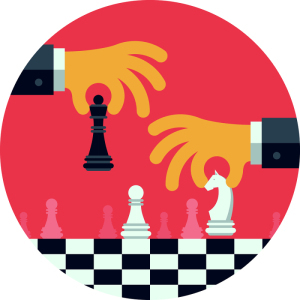 With 'special purpose' vehicle,
deal legally forewent
approval from Japan's FTC
Toshiba, struggling to right itself after being buffeted by scandal, may again be giving off the appearance of questionable accounting.

Now in an effort to generate more cash on its books before the end of its business year in March, it has arranged to have Canon's purchase of its medical equipment business booked before the deal got the regulatory OK.

The maneuver plumped up the corporate books of the beleaguered giant by $5.95 billion.

This is in keeping with earlier stated goals by Toshiba management. "We wanted, somehow, to recover our shareholders' equity," Toshiba CEO Masashi Muromachi told a March 18 news conference. "In the midst of this, there was this wonderful proposal from Canon," which both companies vetted with their lawyers, he said.

Canon was certainly pleased. It noted that the combination of Canon with Toshiba's medical unit would "accelerate entry into new fields," "further improvements in quality through shared production technology," and "expand business domains through enhanced development capabilities," according to a statement.

But the unusual deal structure immediately raised howls of protest from jilted bidding rival Fujifilm Holdings, which noted that it "would make a mockery of the law," according to Reuters. The company also stated that "it is a method that companies like ours, with open, fair and clear policies, could never consider."

However, it appears likely the deal broke no antitrust regulations, experts told the news agency, which stated that only deals involving buyers with over 20 billion yen annually needed the nod from Japan's Fair Trade Commission.

Toshiba avoided problems by selling Canon "MS Holding", a "special-purpose vehicle with $300 in capital that was created just to conduct the transaction," said the news service. This stripped voting control from its medical unit and gave it to the vehicle. In a press release from Toshiba, it noted that MS Holding has just three shareholders — the former head of trading house Sumitomo Corporation, a lawyer, and an accountant — each owning one-third of the entity.

The arrangement is not ideal — at least for Canon. It has paid for assets it has yet to control.

"The scheme is slipping through a set of accounting rules regarding special-purpose vehicles," Yuji Hosono, a certified public accountant experienced in corporate auditing, told Reuters, adding that "it's compliant, but goes against the principle of accounting."
1(current)
2