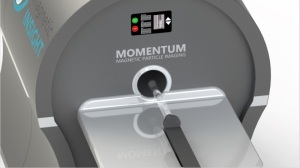 The technology, which is being developed by Magnetic Insight, is generating a great deal of interest — and funding.

According to Goodwill, MPI is well suited to perfusion imaging and solely detects tracer flow into and out of a patient’s small blood vessels. He said that one application is immune cell tracking. This allows labeling of a patient’s immune cells and to map migration to sites of inflammation caused by such conditions as a solid tumor, arthritis, or an organ being rejected.

He said that MPI is unlike MRI.

“Although they both use magnets, MPI and MRI are not related. MPI is a molecular imaging modality that sees functional events quantified through detecting the precise concentration of an iron oxide tracer anywhere in the patient,” he explained. “Images can be acquired within seconds to minutes as currently applied in animal models.”

MRI, Goodwill explained, produces images showing anatomy, and in which an injectable contrast agent is not always required. In a 2012 paper he and other researchers published in Advanced Materials, they found that MPI “shows extraordinary promise” as a safe substitute for iodinated or gadolinium contrasts. As reported previously in HCB News, gadolinium has come under scrutiny for possible toxic effects and complications in certain patients.

Magnetic Insight is an early diagnostic imaging company accelerating preclinical MPI research with direct translation to clinical applications. The company, which raised $1.4 million in pre-seed funding, announced this week that it had raised an additional $3 million in seed funding, $1 million more than its goal.

“Our current funding round marks the commercial introduction of the preclinical Momentum Imaging System,” said Goodwill.

The latest equity round was led by Sand Hill Angels and other sources, including the Stanford StartX fund. Stanford StartX is a 501(c)(3) startup accelerator funding source. The company’s research conducted over the past decade at UC Berkeley has also been supported through grants from the National Institutes of Health, among others.

He added that preclinical testing is already underway in small animals at UC Berkeley. This effort will be expanded in collaboration with the Stanford Medicine neuroradiology department. According to Goodwill, he believes clinical applications could be available within three to four years.