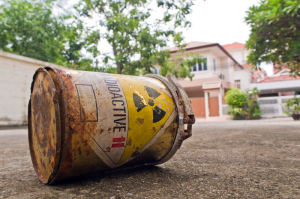 #RSNA16
In the wrong hands, the radioactive materials used to save lives in hospitals can be used to take lives elsewhere.

FBI and Department of Energy reps briefed a room full of RSNA attendees in Chicago last week about a growing litany of concerns ranging from disgruntled medical employees stealing radioactive materials, to patients setting off radiation detectors at sporting events.

"You're kind of special customers to us," said Robert Simmons, Special Agent with the FBI who is the Chicago lead for radioactive threats. "It's no bother to call the FBI if someone walks into your facility and starts asking questions about nuclear material."

According to Simmons, blood irradiators, research irradiators and radiotherapy systems are all examples of potential targets for theft from medical facilities. He said that a likely scenario would be by an insider.

"You have to believe one of your employees could do this — and that's hard to do," said Simmons. "That's a hump you have to get over. You have to operate at the level that something bad could happen."

Simmons cited the 2006 poisoning of Russian Journalist Alexander Litvinenko. He died three weeks after radioactive poison was put in a cup of tea. In a U.S. case, a man angry over a custody dispute case tried to poison his son. Fortunately, the child was not harmed.

He said suspicious behavior that would tip off such a problem employee included:

In 2006 there was suspicious activity around a gamma knife containing cobalt 60 at the University of Pittsburgh, and in 2015 a truck hauling a cobalt-60 source used in tele-therapy was hijacked in Mexico, said Simmons. Fortunately, the thieves did not know what they had and the device was found dumped at the side of the road a few days later.

He stressed that hospitals have to be serious about accountability for nuclear materials, and cautioned that the owner of any stolen material generally has responsibility for recovery and clean-up. There is also a public relations price to pay.
1(current)
2