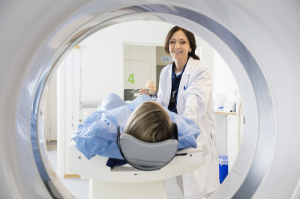 A just-published study by the Harvey L. Neiman Health Policy Institute at NYU seems to validate the general uneasiness that radiologists are feeling in the face of the imminent federal Medicare Access and CHIP Reauthorization Act (MACRA) changes soon to impact their reimbursement.

The study was just published in the Journal of the American College of Radiology (JACR).

While CMS seems prepared to make allowances for noninvasive radiologists who do not operate "patient-facing" practices, the study results suggested that many radiologists will be ineligible for such consideration.

"This [ineligibility] is important since it would result in many radiologists being evaluated on measures that are beyond their direct control and lack relevance to their practice," Dr. Andrew Rosenkrantz, lead author and Associate Professor and Director of Health Policy in the Department of Radiology at NYU Langone Medical Center, told HCB News.

According to Rosenkrantz, such a result is not at all what CMS intends to achieve through MACRA. He explained that the intent of the new payment model is to be more specialty-specific in its evaluation of physicians, compared with earlier federal value programs.

The study analyzed 2014 Medicare data for nearly 29,000 diagnostic radiologists. The authors determined that based on the data, about 72 percent of radiologists who read studies and mostly relay their interpretation to referring physicians (who are patient-facing) would qualify for the special consideration status. These special considerations waive such performance measures as patient satisfaction.

However, if a different formula were adapted that, for example, weighted performance on cost-efficiency, nearly all radiologists would be evaluated on factors more realistic to their practice and under their control. This, the study concluded, would provide "a fairer opportunity for success in performance review under the Merit-Based Incentive Payment System (MIPS)".

The transition to the new payment system is also complicated by lack of code details.

"It is also important to note that as of this writing, the final list of procedure codes to be considered patient-facing encounters has not yet been made publicly available by CMS," said Rosenkrantz. "This information is critical for radiology groups to be able to estimate their likelihood of receiving special considerations."

He added that hopefully the codes will be released "soon". However, in preparation for the switch to a new reimbursement model, Rosenkrantz offered several suggestions: