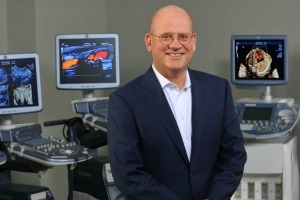 John Flannery
The health care industry has converged on Orlando, Florida, for the annual HIMSS conference. It is an event that brings together hospital executives, tech startups, medical manufacturers and physicians with a common goal: discovering the latest and greatest in health IT.

In an exclusive interview, John Flannery, CEO of GE Healthcare, gave HCB News a wide-angle perspective on what HIMSS means for his company, and how he views GE's role in the rapidly-evolving world of health IT.

HCB News: What kind of message is GE Healthcare conveying at HIMSS17?

John Flannery: One of the impressions you’ll walk away with from our HIMSS discussions — and frankly our RSNA discussions as well — is that radiology and informatics are merging together.

I certainly see a path down the road where these aren’t two separate ideas and two separate shows, and it’s really the interplay of the equipment and the data and the analytics and how those combine to produce better clinical and economic outcomes. Our equipment business is aligning digitally with our IT business, so these things are becoming one and the same.

Second, General Electric has developed an industrial IoT (Internet of Things) platform called Predix, this is a multi-billion dollar investment that we’re leveraging across the verticals inside of GE. Our particular aspect of that is GE Health Cloud.

At HIMSS we’re going to be showing about 20 different workflow and workstation products across ambulatory care, financial management, clinical operations, etc. — we have 13 apps that we’re going to show, five of which are commercially available and the rest are coming out. These apps are all about leveraging analytics for better clinical or economic outcomes.

HCB News: So these apps will exist on the GE Health Cloud?

JF: Yes, think of GE Healthcare’s Predix platform as similar to an iTunes, that’s the easiest analogy. We will be putting up a number of our own applications which we're developing now alongside several clinical and academic partners, but we envision the vast majority of these apps will come from third-party developers using the platform and bringing new analytics to our customers.

At GE Healthcare, we’re spending about $500 million over the next few years on digital. We’ve got 5,000 software engineers today and that number is growing — it’s about 10 percent of our total workforce.

With regard to our discussions at HIMSS, on Monday we announced an outcome of one of our more robust applications, DenialsIQ, which is a tool that unearthed $2 billion worth of savings for our customers.
1(current)
2
3
4