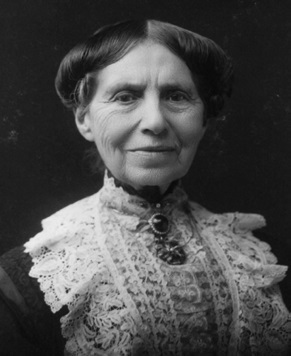 On May 21, 1881, Clara Barton became a founder and the first president of the American Red Cross. Barton was born in 1821 on Christmas Day in North Oxford, Mass. As a child, Barton was known to be shy and quiet. At the age of 10, however, there was a glimpse of what she would become in later life. Her brother, David, had taken a serious fall off a barn roof and Barton stepped in to care for him, even after the doctors had given up hope. David survived and fully recovered due to Barton’s care.

Thanks, in part, to extensive efforts by her parents, Barton overcame her shyness and gained her teacher’s certification at the age of 17. She continued teaching for more than a decade. Building on her success, she went on to attend the Clinton Liberal Institute in 1850 (the Institute was destroyed by fire in 1900). Two years later, Baron was tapped to open a free school in Bordentown, N.J. She and another woman were responsible for the education of more than 600 students. The town, seeing the value of the school, raised funds for a new school building. Once the new building was complete, the school board replaced Barton with a male principal, feeling that running a large institution wasn’t an appropriate role for a woman. Barton was demoted to an assistant role. She worked in that position until the stress of working under someone who didn’t share her vision took its toll. She quit and, in 1855, she moved to Washington, D.C., to work as a clerk in the U.S. Patent Office. Her salary was equal to her male counterparts and that fact didn’t sit well with many of the men around her. Workplace abuse was a common theme during her time there.

If the unequal treatment she received in her professional life laid the foundation for her legacy, the Baltimore Riot of 1861 provided the materials to build the shining tower that stands atop that foundation. The riot resulted in four Union soldier deaths and three dozen soldiers injured. History doesn’t record how many civilians were injured, but we do know that Barton administered aid to about 40 victims of the violence. Barton not only helped to nurse the men back to health, she also coordinated the collection of medical supplies, first to care for her wards and later to care for other Union soldiers. She used her own home to store supplies and by 1862, she was working on the front lines.

She proved incredibly resourceful, placing a newspaper ad to request supplies after the first battle of Bull Run and getting an extraordinary response as donations poured in. However, when supplies weren’t at hand, she made due by improvising. For instance, at Antietam, short of bandages, she used corn husks to patch wounded soldiers. Her fearlessness, dedication and intelligence were recognized and she was given the nickname, “Angel of the Battlefield.”
1(current)
2