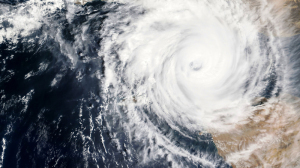 As winds exceeding 100 miles per hour and rising floodwaters swept through the Houston area during Hurricane Harvey’s destruction, operations were up and running at St. Joseph Medical Center.

The hurricane lasted for five days, but the hospital never shut down or lost power. It did, however, experience its fair share of challenges, including a staffing shortage, working without an MR scanner and the need to expand emergency services.

“Our census here grew dramatically,” Mary Posern, director of cardiology and imaging services at St. Joseph Medical Center, told HealthCare Business News. “A lot of people who were sick ended up with us because there was nowhere else to go. Imaging was pretty extensive during the storm.”

The summer of 2017 will be remembered as one in which the U.S. took an historic beating from hurricanes. First, Harvey rolled into Texas, making landfall on Aug. 25. Irma followed roughly two weeks later in Florida, and on Sept. 20 Maria began clobbering Puerto Rico.

For Texas and Florida, mobile imaging units have played a vital role in keeping radiology departments up and running. Companies like Shared Medical Services were busy working with customers to secure mobile fleets, pulling units to higher ground to avoid water damage and making sure that in-house units were securely bolted down.

When Irma hit Florida, Paul Zahn, director of sales and interim services at Shared Medical Services, says the company was unable to retrieve one of its mobile CT units because of the hurricane.

“We tried to get it out, but we couldn’t get any drivers down there that would have got it out in time to where we wanted it,” says Zahn.

Luckily, the system was protected by a building it was tucked behind and was in Miami, avoiding the full impact of the storm, the brunt of which fell upon the west coast of the Sunshine State.

Hospitals, their imaging departments and mobile imaging companies are still picking up the pieces in the wake of these natural disasters, but many important lessons have already emerged. The front-line successes and failures of individuals who worked together to keep patients safe and equipment operable during and after the wet summer of 2017 will pave the way for smarter emergency decision-making when the next big hurricane makes landfall.

The calm before the storm
The key for any imaging or radiology work area in the path of a storm is to have a game plan in advance, according to Brad Felt, director of service for service provider GE Healthcare in Florida.
1(current)
2
3
4
5