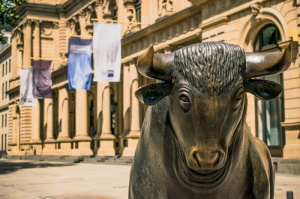 Outside the Frankfurt Stock
Exchange building
Siemens Healthineers shares roared up after being launched on the Frankfurt stock exchange after the IPO March 15.

The price at the IPO was in the lower half of its guidance range of 26 to 31 euros.

"Books are closed. Orders below 28 euros per share risk missing the deal," one bookrunner messaged, according to Reuters.

The stock closed at 30 euros on Friday.

Buyers snapped up 150 million shares, representing 15 percent of Healthineers. Siemens stated that it intended to continue as a majority shareholder for the long haul.

The investors were weighted toward Europe, with 30 percent in Germany, and in the U.K., 26 percent. Just 21 percent came from the U.S., Reuters noted, citing Bloomberg.

The estimates of Healthineers dipped from recent market market volatility, among other reasons.

Earlier in March, an unnamed senior banker told Reuters that, "investors are pushing back against aggressive valuations and showing much more price sensitivity, because they are fed up with poor IPO aftermarket performance."

There is also more competition for IPO dollars. "The number of potential IPOs has basically accelerated, again. There's a lot in the pipeline," Ed Meier, fund manager at Old Mutual Global Investors, told Reuters at that time.

In addition there is some uncertainty about the ultimate “success of the company’s new line of diagnostics products called Atellica,” according to Bloomberg.

But the company is confident about diagnostics. “The nice thing about lab diagnostics is that the market is growing, and that means we can improve our market share,” Michael Sen, chairman of Siemens Healthineers supervisory board, told Bloomberg, which said he was reportedly “happy with the share performance.”

The IPO has been a long time coming, with news of the intention to list Healthineers first breaking in November, 2016.

In the prospectus for the IPO the company made its case, stating that the intended purpose of the proceeds is “to lay the foundation for the company’s further profitable growth and the expansion of its strong position as a leading global supplier of health care products, solutions and services,” adding that it is also intended “to provide the company with enhanced entrepreneurial flexibility and access to the capital markets in order to grow sustainably and profitably while actively shaping the paradigm shift in the health care industry.”

In January, Siemens Healthineers announced a round of planned cost-cutting ahead of its IPO. The strategic plans called for structural changes to save about $293.9 million a year, with the impact of these savings beginning to show in 2020.

The company has also announced plans to make the most of the shifting landscape in health care.

Siemens Healthineers is “a business well prepared to take advantage of the paradigm shifts in health care," said Sen in January.

And Bernd Montag, CEO of Siemens Healthineers stressed, in January, that given its positioning and global footprint, the organization will be “one of the main long-term beneficiaries of the significant structural growth inherent in our markets.”