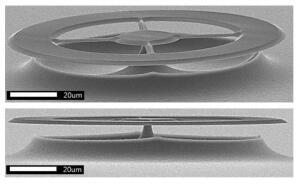 Researchers created the sensor using
a scanning electron micrograph of a
microdisk similar to the one
Sounds from organisms as small as cells and living bacteria may one day be audible to the human ear using an experimental ultrasound component.

Researchers from the University of Queensland in Australia have developed an extremely sensitive sensor for measuring ultrasound that may help pave the way to new treatments and provide a deeper understanding of biological systems by enabling imaging of challenging subjects.

"Miniature high sensitivity ultrasound could allow you to image and study the health and behavior of single cells," professor Warwick Bowen from UQ's Precision Sensing Initiative and the Australian Centre for Engineered Quantum Systems, told HCB News. "For instance, it is known that malaria causes cells to vibrate in different ways than healthy cells. Our predictions indicate that our detector is precise enough to detect the sound waves created by these vibrations. It could, therefore, provide a new capability to do assays identifying malaria or other diseases at the single-cell level. Another application of ultrasound that resolves single cells is to image how cancer cells break away from tumors, spreading through the body."

The team behind the technology combined modern nanofabrication and nanophotonics techniques to build the ultra-precise ultrasound sensors on a silicon chip, with the sensor offering a hundred times more sensitivity than previous sensors.

This sensitivity is potent to the point that it even allows listeners to hear the minuscule random forces from surrounding air molecules for the first time ever.

In addition to healthcare, the technology could be applied in other fields, such as sonar imaging of underwater objects and navigation of unmanned aerial vehicles.

Bowen says that any deployment of the solution is a long way off, however. "To take this demonstration to a commercial outcome will be a major challenge, not only in terms of miniaturization and sensor packaging, but also regulatory. The next steps for us in this process are to start to integrate the laser and detector systems used to probe and monitor the sensor onto a silicon chip with the sensor itself, and to test their capability to indeed detect single-cell vibrations. I would expect that full commercialization will – if all goes well – take perhaps a decade."

The sensor is one of many experimental innovations developed within the field of ultrasound technology over the last year. For instance, researchers in London recently developed an all-optical ultrasound system that holds the potential for paving the way to combined MR-ultrasound imaging. In addition, a new technique out of Switzerland that can enhance contrast in scans may lead to higher quality images for interpretation.