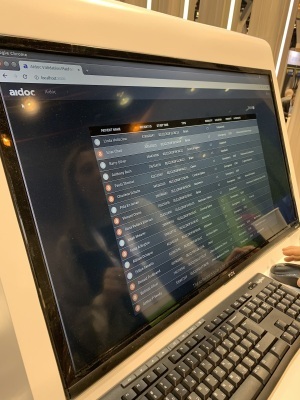 The two are designed to detect the presence of vessel occlusion and air within the abdomen, respectively, based on CT scan findings, and build on the capabilities already offered by the company’s FDA-cleared solutions for intracranial hemorrhages, C-spine fractures and pulmonary embolisms.

“This actually completes, from an FDA clearance perspective, our stroke package. With vessel occlusion and intracranial hemorrhage, you’re covering almost all stroke options,” Ariella Shoham, VP of marketing for Aidoc, told HCB News. “The importance of air in the abdomen from an acute perspective is that it’s usually indicative of some trauma that has created a hole that should not be there. That’s probably indicative of something that is wrong and will require additional treatment from a disease perspective. Usually it requires immediate treatment.”

The vessel occlusion tool will include a way to communicate findings directly to the referring physicians, a crucial feature due to stroke, requiring immediate action.

In addition, the company discussed the first applications of its new oncology product line, which include lung nodules, bone lesions and liver lesions. The solution for lung nodules, which are often missed, is currently in production and has an under-investigation status. “It has only been used a few days in clinical practice, and has already provided value to 11 patients,” said Shoham.

Bone and liver lesions are expected to be released at later dates at preliminary sites and will also be under investigation. Shoham adds that the applications for vessel occlusion and air within the abdomen are important because they reduce lengths of stay for inpatients as well as emergency departments.

“Because of the efficiency change, even at the level of the radiologist reading faster and getting to both the positive and negative patients faster, you are able to reduce length of stay for inpatients by three quarters of a day, which actually ends up in actual dollar value,” she said.

Aidoc previously released its AI solution for flagging pulmonary embolisms in May. Its intracranial hemorrhage solution was cleared by the FDA in 2018.