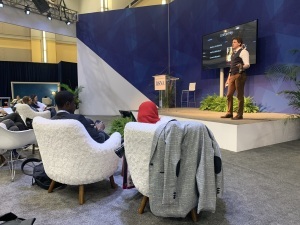 Dr. Brandon P. Brown encourages radiologists to
look out for and support one another through
bad outcomes, as well as patients
If a physician sees a patient in the ICU in respiratory distress, they will react and get help, even if it means just pulling the code cord. But what if they pass one of their own… a colleague who is in distress?

That’s the question that Dr. Brandon P. Brown, a pediatric and fetal radiologist at the Indiana University School of Medicine, posed during a session he presented at the 2019 annual meeting of the Radiological Society of North America (RSNA) in Chicago. The name of the session was Just Culture: How to Build Collegiality, Collaboration and Joy in your radiology practice.

“I think a lot of us — and I know I’ve done this — have walked past a different type of code: a colleague in distress, a friend or acquaintance in distress. I’ve thought, ‘Something seems off with them but it’s going to be too awkward … I don’t want to pry and make an uncomfortable situation. I’m just going to say hi and move along,’” he said. “We wouldn’t walk past the medical distress of the ICU ... but we might be walking past the distress of each other on a regular basis.”

Bad outcomes among patients can leave physicians — who Brown refers to as the "second victims" in such cases — feeling isolated, ostracized, and less confident in their abilities. At the same time, burnout can cause many to feel anxious, sleep deprived and less confident or dissatisfied with their jobs, negatively affecting their performance, as well as the care and safety of patients.

A survey by the Joint Commission found that 90 percent of physicians reported being involved in a case where a medical error was made. Of this group, 90 percent reported having no support from their health system or own specialty.

Notable causes of medical errors are stresses and pressures, which are often created by the very innovations designed to streamline workflow and boost delivery of care, such as AI and big data. Efforts and challenges to managing and leveraging these emerging components of medicine can lead to feelings of dissatisfaction with one’s work environment. At the same time, they can make physicians so busy that they fail to notice or do not take the time to interact with one another. This prevents them from conveying their frustrations and issues on their mind, thereby negatively affecting their work performance.

“Radiology shouldn’t be judged by the cutting edge technology, latest imaging modality, or AI,” said Brown. “It should be judged by the way we’re taking care of one another at our weakest and most vulnerable moments.”

To address this, Brown proposes a three-step process, the first being to understand and practice collegiality. This involves treating one another as colleagues instead of just co-workers, and reaching out to talk with one another, to show support when one encounters bad experiences in their work.

Forming peer-to-peer support groups made up of different physicians, or hotlines to periodically check up on colleagues can help bring this to fruition, he says, though they must be local. “Culture has to be local. It has to be people taking care of each other who actually are part of that community.”

Collegiality must then transform into collaborations, with physicians taking the time to form relationships and trust one another.

They also should reach out to colleagues in other institutions to learn from one another and exchange ideas. Only then can the third step take place, in which the collaborations grow into free associations that support one another and not just mentor but sponsor each other in ideas, beliefs and ideals.

“A lot of times people don’t tell us what they really mean,” said Brown. “We assume they want time to process when in reality, time after time, physicians who have been in these situations have reported thinking they are isolated and wonder ‘if no one trusts me anymore.’”