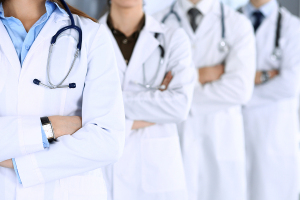 Decreases in available doctors are expected in both primary and specialty care, despite a rising demand for physicians by a growing and aging population, says the study, which is titled The Complexities of Physician Supply and Demand: Projection from 2018-2033.

“To ensure an adequate physician workforce, Congress must remove the caps on federal funding for graduate medical education that have been in place since 1997,” Michael Dill, the AAMC’s director of workforce studies, told HCB News. “To help address the physician shortage, the bipartisan Resident Physician Shortage Reduction Act of 2019 would provide increased Medicare support for an additional 3,000 new residency positions each year over the next five years.”

Conducted prior to the rise of COVID-19, the analysis evaluated supply and demand scenarios, as well as trends in healthcare delivery and the state of the healthcare workforce, including data on physician work hours and retirement trends.

The study credits this lack of medical personnel to a large portion now nearing traditional retirement age, with two of five currently active physicians to reach 65 and over within the next decade. Supply projections are also sensitive to workforce decisions of older physicians, and greater concerns over physician burnout are more likely to cause physicians to accelerate rather than delay retirement.

Concerns over the lack of physicians are further fueled by a projected 10.4% rise in the U.S. population between 2018 and 2033, from 327 million to 361 million. The number of people under 18 are expected to grow by 3.9% and those 65 and over by 45.1%, which indicates a greater need for specialists that predominantly care for older Americans.

The authors of the report also evaluated scenarios where underserved populations — uninsured individuals, those in rural settings, and people of different races and ethnicities — were to experience the same healthcare use patterns as populations that face fewer barriers to access for care. They found that current demand for physicians could increase by between 74,100 and 145,500. Such estimates, which are separate from the shortage-projection ranges, highlight the impact of current barriers to care, they say, and indicate a need to consider these factors when assessing the number of available physicians now and in the future.

“The study included an estimate of how many providers would be needed at the present time if currently underserved populations had health care use patterns similar to populations with fewer barriers to access,” said Dill. “Under that hypothetical, current demand for doctors could rise by an additional 74,100 to 145,500 physicians (in 2018).”