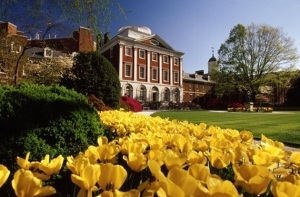 A doctor is suing Pennsylvania Hospital (pictured here) and Penn Medicine for failing to prevent an incident earlier this year in which she was stabbed multiple times by a psychiatric patient (Photo courtesy of Penn Medicine)
A Pennsylvania doctor is suing the facility she worked at and its parent organization for failing to prevent an attack on her by a psychiatric patient earlier this year.

Using the pseudonym, “Dr. A”, the physician filed a lawsuit Wednesday in Philadelphia Common Pleas Court against Pennsylvania Hospital and Penn Medicine. She claims that their “abject disregard” for the safety of employees led to the February incident, in which she was stabbed repeatedly in the head and face, according to The Philadelphia Inquirer.

“This attack was no isolated incident, as previously stated by the hospital. It is a well-known problem in the medical field that is unreported due to a culture of silence,” said one of her lawyers, Brett J. Kaminsky, of the firm, Friedman Schuman, PC.

A second-year psychiatry resident, the doctor was allegedly attacked by Rakeem Anderson, a patient admitted to the neurology floor, on February 23 after she informed him he would not be discharged. Dr. A managed to push an accompanying medical student out of the room, but was pulled back by Anderson who had grabbed her hair. He then punched her before slamming her head on the floor and stabbing her in the face, neck and arms multiple times with a dinner knife and pen.

She says that ten of 15 colleagues watched the attack from a nursing station but did not alert hospital security or appear to know how to respond. No guards were stationed on the floor and there was no panic button in or outside of Anderson’s room.

After being left alone screaming for help in a hallway, she managed to get away from Anderson, and a floor nurse called 911. Anderson was arrested and charged with aggravated assault, possession of an instrument of crime, simple assault and recklessly endangering another person.

The hospital released a statement hours after the incident, saying “there was no danger at any time to other patients and staff at the hospital,” and asserting that “hospital operations continue as usual.”

Dr. A’s lawyers say the hospital did not reach out to the doctor for days and has taken no steps to improve security despite other residents and employees voicing concerns about their safety since the incident.

The attack, they say, is an example of what healthcare experts are calling a “national epidemic,” in which healthcare workers are nine times more likely to be a victim of intentional workplace violence than employees in other industries, according to federal data. Of 180,000 intentionally caused workplace injuries that required a day or more of recovery, 71% were reported by doctors, nurses and other healthcare employees, according to the U.S. Bureau of Labor Statistics in 2017.

A Penn Medicine spokesperson declined to comment on the suit last Wednesday but said that “ensuring the safety of our patients and staff in all settings is a top priority” and that the hospital system continues to “continuously evaluate” its security protocols.