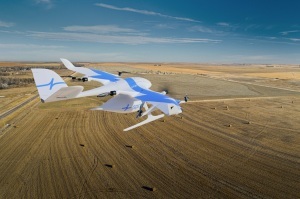 Wingcopter will use its technology to help Spright deliver medical supplies, medication and equipment to hospitals in the U.S.
German drone delivery company Wingcopter has stuck a $16 million partnership with Spright for addressing rising demands for drone delivery services in healthcare.

The drone division for American air medical service provider Air Methods, Spright facilitates deliveries to hospitals through a network of more than 300 bases across 48 states.

The partnership gives it a large fleet of Wingcopter’s flagship delivery drone, the Wingcopter 198, for use. It is expected to provide faster and instant accessibility to time-critical medical supplies, such as hazmat suits, especially in sparsely populated, rural areas of the U.S.

“Electrically powered drones such as the Wingcopter 198 allow for on-demand and instant deliveries at lower costs and with zero emissions. They can lead to faster turnaround times of lab samples, for example, and consequently, faster diagnostics and faster, more targeted treatments for patients,” Bill Wimberley, head of business development for Wingcopter, told HCB News.

As part of the collaboration, Spright will conduct initial tests with the drone at Hutchinson Regional Health System in Kansas and utilize them later in the year in additional strategic medical projects outside of Kansas. The Wingcopter fleet is expected to increase access to care in rural and underserved communities and transport vital medical supplies, medication, vaccines, blood, and lab samples between facilities. It also will help make turnaround time for lab samples faster and deliver more targeted treatments to patients.

The Wingcopter 198 is electrically powered and designed to reduce the medical industry’s carbon footprint and create more eco-friendly and sustainable supply chains with faster and more predictable delivery times. This contrasts with go-to solutions for emergencies, which are often extremely expensive, noisy and rely on jet fuel.

The rapid adoption of eVTOL technology for last-mile logistics is expected to raise the projected compound annual growth rate of the drone delivery market beyond 50% and to a value of almost $40 billion in 2030. This is partially due to the fact that ground transport does not allow for instant deliveries and is bound by fixed times and routes that it travels only once or twice a day.
1(current)
2