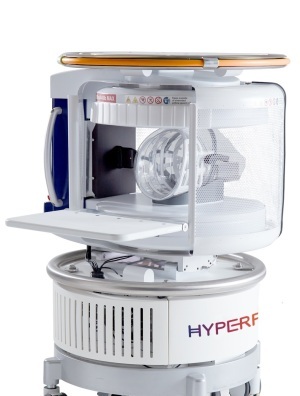 They are also effective at differentiating ischemic strokes from ones caused by blood clots, according to Yale and Harvard researchers who used portable MR to successfully identify such cases in 90% of patients scanned.

Determining the type of stroke a patient has is crucial for choosing the right treatment, as blood thinners are essential for those with ischemic strokes but dangerous for patients with ones where the bleeding is in the brain. Portable MR can bring care right to the patient’s bedside, in ambulances or in remote clinics. It also decreases waiting for scans with stationary MR, which are in high demand and often in use.

As a result, the scientists say that it may ensure faster decision-making and delivery for treatment in remote areas where patients lack access to major hospitals with standard MR systems. “This is the first systematic evidence you can detect ischemic strokes using portable, bedside devices,” said Kevin Sheth, a professor of neurology and neurosurgery at Yale School of Medicine and co-corresponding author of the study.

Sheth and his peers used portable MR scanners on 50 patients at Yale New Haven Hospital and found they largely confirmed cases of ischemic stroke that were diagnosed by stationary MRs. For 45 of these patients, it detected blood clots as small as four millimeters in size.

The team used Swoop, a portable MR scanner developed by Yale New Haven and Hyperfine. The solution is equipped with a 0.064 magnet and is 20 times cheaper, 10 times lighter and consumes 35 times less power than fixed conventional MR solutions, according to Hyperfine. It made its debut in 2019 at RSNA and received FDA clearance a year later in December 2020.

It is designed to bring MR to parts of the world lacking access, as well as fragile patients who cannot move from the bedside. This includes for stroke, as evidenced by a study last summer at Yale New Haven where Sheath and his colleagues used the solution to assess 144 patients and compared the results to those of traditional neuroimaging solutions.

Swoop was used specifically to scan the brains of patients at their bedside. With it, neuroradiologists were able to identify 80% of intracerebral hemorrhages in images, making the study the first to validate the ability of portable MR to show the clinical issues and risks of a brain hemorrhage.
1(current)
2