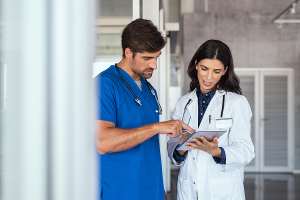 The increase was attributed to more NPPs employed per practice, as well as an 11% increase in the amount of practices taking them on, according to a new Harvey L. Neiman Health Policy Institute study. Additionally, those who employed more than 50 radiologists were more likely to hire NPPs, as were those in urban settings, those with above interventional radiology specialization, and who hired more earlier-career radiologists.

“Given reduced local access to both diagnostic and interventional radiologists in rural counties across the U.S., we found it interesting that urban, rather than rural radiology practices were much more likely to employ NPPs to meet their clinical service needs,” said first author Stefan Santavicca, senior data analyst in the department of radiology and imaging sciences at Emory University School of Medicine, in a statement.

The study also showed that each 1% increase in interventional radiologists as a share of all radiologists in a practice raised the chances that the practice employed one or more NPPs by 453%.

Given that the interventional radiology community has long asked for more longitudinal clinical care to be added to their workplaces, the authors were unfazed by this finding. They were, however, surprised that having earlier-career radiologists made providers more likely to hire NPPs. Each additional year of practice, on average within a group, was associated with a 4% decrease in the odds of employing NPPs.

“As radiology practice and professional society leaders seek to better understand and react to apparent trends in NPPs, our findings about their evolving use within the specialty could inform these efforts,” said senior author Dr. Richard Duszak Jr., professor and vice chair for health policy and practice in the department of radiology and imaging sciences at Emory University School of Medicine and Neiman HPI Affiliate Senior Research Fellow.

But while more NPPs may be finding work among radiology-only providers, the scope of their duties and the procedures they perform have not changed, according to a 2019 study. Scholars of the American Roentgen Ray Society said that less than 2% of nurse practitioners and physician assistants (NPPs) perform diagnostic imaging services despite Medicare claims data indicating a rise in these roles for such procedures.

The authors were unable to respond to HCB News' request for comment.