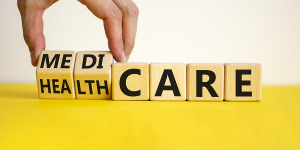 While percentages remained relatively stable over the study period, the ratio of private insurer to Medicare payments did rise from 222% in 2018 to 235% in 2019. This was partially due to increases in hospital prices, which raised per capita spending among privately insured patients, said the authors. Spending on hospital services ended up accounting for 37% of total personal healthcare spending in 2019. Prices varied among states, with some having relative costs under 175% of what the state-government insurance plan would have paid and others having relative prices at or exceeding 310%.

The researchers looked at more than 4,000 hospitals in 49 states and Washington, D.C. between 2018 and 2020. This was 25% more hospitals than in their previous analysis in 2018. Maryland was excluded because privately insured and Medicare recipients there pay the same price. They also, for the first time, included more than 4,000 ambulatory surgical centers for outpatient services. Data sources included $78.8 billion in spending on hospital-based care and $2 billion on care in ambulatory surgery centers.

Lead author and RAND policy researcher Christopher Whaley says the analysis will help businesses, who provide most private insurance but are often not privy to information on prices negotiated with hospitals for them. “Employers can use this report to become better-informed purchasers of health benefits. This work also highlights the levels and variation in hospital prices paid by employers and private insurers, and thus may help policymakers who may be looking for strategies to curb healthcare spending.”

States like Hawaii, Arkansas and Washington had costs less than 175% of what Medicare would have paid, while Florida, West Virginia and South Carolina had costs at or above 310% of what it spent. An increase in the volume of claims from states with prices below the average price in 2018 did bring down relative costs for hospital facility-only services from 247% in 2018 to 224% in 2020. Unlike other studies, the RAND analysis reported prices and identified hospitals and groups under joint ownership by name.

Average professional services such as physician fees averaged 163% of what Medicare would have paid for the same services. Prices for COVID-19 hospitalization were similar to those for overall inpatient admissions and averaged 241% of Medicare costs.
1(current)
2