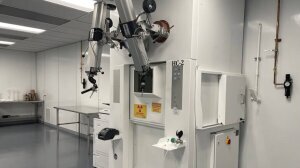 A replacement for the company’s Fort Lauderdale site, the new facility is the largest of PETNET Solutions’ 43 radiopharmacies in the U.S., at 10,995 square feet. Its launch scales the company’s production capacity, with three new radiopharmaceuticals to be produced there, alongside its traditional agents.

"The opening of PETNET South Florida not only represents our continued investment in our network of radiopharmacies from a quality control and regulatory standpoint, but it also expands access to additional novel radiopharmaceuticals that can provide more information to physicians, with the potential for improved clinical outcomes for patients," said Barry Scott, head of PETNET Solutions Inc., in a statement.

The radiopharmacy is one of three in Florida run by the company, and is equipped with two high-capacity cyclotrons, and redundant production and quality control equipment. It will produce PET imaging agents for cancers, including breast and prostate, and neurology agents.

With Zionexa, PETNET Solutions scored FDA approval in 2020 for Cerianna Fluoroestradiol F-18, the first ever breast cancer-specific PET imaging agent. It also signed an agreement in 2017 with Cerveau Technologies to manufacture an investigational tau imaging agent for Alzheimer's.

PETNET South Florida is one of 15 capital improvement projects that Siemens is undertaking in the U.S. to expand its manufacturing and R&D capabilities.

Siemens is also doing the same in Europe. In February 2022, the German business invested over $67 million to upgrade its Kemnath production facility in Bavaria. The site manufactures radiotherapy devices designed by Varian, which Siemens acquired in early 2021 for $16.4 billion.

And despite rumors of a sale, Siemens confirmed in late June that instead of selling its ultrasound division, it had “already repositioned the business at the end of last year and is investing heavily in it.”