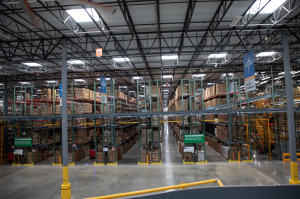 The company celebrated the opening of the 1.4 million-square-foot LEED-certified facility in Grayslake, Illinois on July 20 with a ribbon cutting ceremony. It will ship solutions to hospitals, ambulatory surgery centers, hospices and physician offices. The center will initially create 350 new jobs and eventually employ 700 total, once at full capacity.

It also is the inaugural facility of real estate firm The Alter Group’s project, Cornerstone, a $750 million, 641-acre development at Peterson Road and Route 83. Its completion makes it the fifth-largest warehouse in the world.

The company expects the center to manage more than $1 billion in annual orders. “Medline has been operating in Lake County for nearly 50 years, and we look forward to growing our presence in the community with this latest addition in Grayslake,” said Brian Bevers, senior vice president of operations at Medline, in a statement.

The distribution center was designed as part of Medline’s Healthcare Resilience Initiative, a $2 billion national capital expenditure campaign to implement new distribution centers, manufacturing capabilities and IT upgrades. Its development was announced in 2020. The company said back then that it planned to relocate its Libertyville operations to the new facility.

Medline will spend approximately $2.5 million annually with local vendors on maintenance, upkeep and operations. It manages six facilities throughout Lake County, containing offices, manufacturing and distribution centers, and employs over 3,000 in all of them together.

The company operates more than 20 manufacturing sites and over 50 distribution centers in North America, and distributes 300,000 unique medical products, including over 65,000 of its own.

“This investment highlights the tremendous economic growth that we’ve seen in recent years, in the village and in the broader Lake County community,” said Grayslake mayor Rhett Taylor.

The opening of the center comes just days after the company announced that it will close its North Carolina facility in Salisbury, laying off 97 employees, according to WRAL TechWire. It is opening a new facility in Mebane where it is expected to hire at least 250 and grow the workforce to over 700 by 2029.