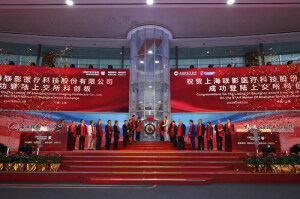 The company's IPO is the largest on the exchange’s Science and Technology Innovation Board (STAR Market) so far this year, and the third largest listing in China this year, according to Reuters.

Strong demand from investors fueled the jump, with shares in UIH ending the session 65% higher at 181.1 yuan ($26.49). The biggest domestic player in its field, the company sold 100 million shares at 109.88 yuan apiece and raised 10.99 billion yuan ($1.62 billion) earlier this month after the offer was oversubscribed more than 3,500 times among retail investors.

UIH will use the net proceeds to fund research and development of next-generation solutions, including high-end medical imaging systems, and will invest in industrialization and marketing service network projects. It also will use a portion as supplementary operating capital.

“We will better standardize our corporate governance, conduct highly efficient communications, work on long-term, sustainable value creation, and deliver great returns to our customers, shareholders, employees, and the society," said Al Zhang, chairman and CEO of UIH, at the listing ceremony.

Yang Hongxun, analyst at investment consultancy Shandong Shenguang, told Reuters that large market liquidity and the company's fundamentals increased demand. "The market is not in shortage of liquidity, and sentiment is improving."

Reports of a planned IPO emerged in May 2021, saying that UIH was eyeing one in Hong Kong and expected to raise at least $1 billion. A spokesperson for the company said at the time that it had signed an agreement for STAR board IPO guidance and started procedures but made no mention of any potential Hong Kong listing.

UIH has launched over 80 solutions on the global market in over 40 countries and regions. This includes its uEXPLORER Total-Body PET/CT, which was released in the U.S. in 2018 and is the first scanner in the world that can produce a 3D image of the human body at one time.

Founded in 2011, the company is based in Shanghai, where in early 2022 it invested over $490 million in an intelligent R&D and manufacturing complex to be its global R&D headquarters.

Its U.S. headquarters is in Houston, where it opened a 91,000 square-foot assembly and shipping factory in 2020 to manage its entire U.S. product distribution operations.