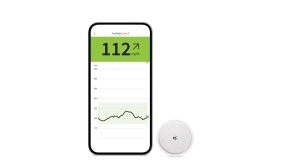 Some companies have had difficulty finding certain older semiconductors for older blood-sugar monitors. (Photo courtesy of Abbott Laboratories)
Medical device manufacturers are feeling the pinch of supply chain disruption and economic inflation, as they struggle to keep up with greater demand created by patients who put off necessary procedures and implants during the pandemic.

Specialized plastics, metals and resins used for making devices are now in short supply, while electronic prices have soared, according to The Wall Street Journal.

Stryker Corporation has raised surgical equipment prices to keep up with rising supply costs, and slowed purchases and production to search for alternative supplies. The company saw its profit margins fall in the third quarter and the cost of sales surpass sales growth, reported The Wall Street Journal.

It has even paid to avoid manufacturing delays. “We’ve been scrambling,” said CEO Kevin Lobo.

Staffing shortages are also a problem, with Edwards Lifesciences Corp. attributing a lack of nurses and technicians to its third-quarter sales rising only 1% from a year earlier.

Analysts and consultants say the industry is partially to blame, having underinvested in chains in the past, due to high profit margins making the need for higher stockpiles less urgent.

One notable shortage earlier this year was contrast dye for CT and MR exams, following the shutdown of GE Healthcare’s Shanghai plant during the city’s COVID-19 lockdowns. This led to procedure cancellations and postponements that hindered the sale of solutions for imaging-guided procedures.

Despite this, the medical devices industry is projected to see a 7.8% rise in its revenue this year to $498.7 billion worldwide. It previously saw an 8.1% increase in 2021, a rebound from the 5.7% decline it experienced during the pandemic in 2020, according to Frost & Sullivan.

Manufacturers are also investing more in supply chains and working with the federal government to secure priority access to certain supplies, such as semiconductors.

“We’re all going through a major modernization in our supply chains,” Ashley McEvoy, who heads Johnson & Johnson’s medical technology unit, said at the same industry conference. “We have not been pace setters relative to other industries. We’re going to have to get masterful at logistics.”