It's a good time for hospital construction 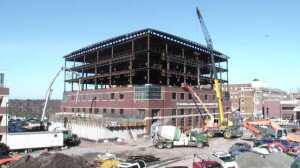 Englewood Hospital and
Medical Center's new
Cancer Treatment and
Wellness Center
under construction
Now that over 32 million Americans have access to insurance coverage under health care reform, coupled with a population that is rapidly aging, the demand for hospital services is getting higher.

Englewood Hospital and Medical Center in New Jersey is just one example of a hospital riding this boom. They are in the midst of a $90 million modernization project. When it's completed in the winter of 2016, it will include a comprehensive cancer treatment and wellness center, a new family birth place and a few campus improvements.

"Based on our market and the population, the projections are there that there's going to be a huge increase in the need for oncology services over the next three to five years and we wanted to be prepared for that," Warren Geller, president and CEO of the hospital, told DOTmed News.

Cancer care, vascular, cardiac, neurosurgical and orthopedic services are some of the areas that will continue to grow to meet the health care demands of an aging population.

But the need for oncology services is not isolated to New Jersey. The University of Kansas Hospital in Kansas City is planning a $250 million expansion project that will include a 92-bed facility for neuroscience and surgical oncology patients.

Outpatient services are also growing. "A lot of ambulatory, surgical procedures and other procedures that might have been inpatient in the past are now happening in an outpatient setting," said Jeffrey Brand, principal and the national health care leader at Perkins Eastman, an architecture firm. "There really is an understanding through research and observation that people do better when they're home."

eMedicineHealth's website states that 60 percent of elective surgery procedures in the U.S. are performed as outpatient surgeries and experts predict it will increase to 75 percent over the next decade.

Outpatient services at Englewood were up seven and a half percent last year. "We're doing our best to keep people out of hospitals," said Geller.

Many hospitals are also putting a greater emphasis on patient satisfaction and designing their buildings to be more hotel-like. It's not a new trend, but it's starting to become more prevalent, said Brand.

"If you're a cancer patient, you can go to a center 50 to 100 times a year so it becomes part of your life and I think creating environments that are softer settings, like hotels or places that are a little bit more not clinical environments is the way to go," he said.
1(current)
2

James Blandi talks about his new position at LFC Capital

The case for ultrasound in an era of health care reform

ACOs are evolving, where will imaging fit in?