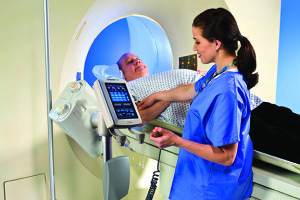 Specializing in the contrast injector sector can be a tough gig. The technology has been around for decades and essentially, it’s a pump. There’s more to it of course, but when placed side-by-side with flashy pieces of equipment like MR or ultrasound, contrast injectors just aren’t sexy. Both those modalities rely on contrast injectors in order to carry out certain imaging procedures, but CT is probably the modality that puts contrast injectors to work the most. Approximately half of all CT exams use contrast, so 30 to 40 million. Still, profits from the sale of injectors pale in comparison to the income generated by consumables — the tubing, syringes and contrast, for example — with the machine the conduit to deliver and exhaust those supplies.

Although the big money in the sector is injected by contrast agents, the biggest players in the equipment equation — Bayer Healthcare and Bracco have made some notable improvements to the equipment over the years that may pique interest and get equipment sales moving as manufacturers gear up to create some must-haves for injectors in the near future.

Unlike infusion pumps, a medical device somewhat notorious for high rates of recall, contrast injectors are relatively free from controversy. In part, it helps that physicians are typically at the patient’s side when the injector is being used. But even with a medical professional close at hand, there still can be problems such as allergic reactions to the contrast being used, extravasation or even renal failure.

Manufacturers have been at work developing solutions to give customers the tools needed to prevent any of those potential issues from becoming clinically significant.

The EmpowerCT Contrast Injection System was brought to market about a decade ago as a single head injector by E-Z-EM Inc. A dual-head, the EmpowerCTA came out later and the company was acquired by Bracco in 2008. In the ensuing years, Bracco has continued to build upon the technology offered in the the CT injector.

“The EmpowerCTA is the first injector to offer an extravasation detection accessory (EDA) solution,” says Kai Huang, Bracco product manager of Device Marketing. The EDA can detect extravasations and pause the CT procedure. The EDA can help prevent significant events from occurring.

The system also offers Saline Advance, an enhancement that was introduced in 2012. Saline Advance utilizes a pendant switch to advance saline to test vein integrity by the patient’s side. Coupled with Saline Advance is Saline Jump, which advances a contrast enhanced CT procedure from the contrast phase to saline, once the technologist receives the required diagnostic information.
1(current)
2
3
4
5