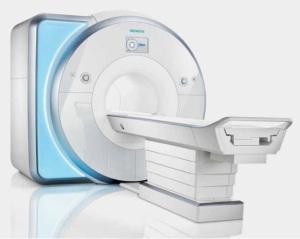 At Cincinnati Children’s Hospital, performing MRI scans on premature babies used to be a rather arduous process. As in most hospitals, the neonatal intensive care unit at Cincinnati is floors away from the radiology department. Babies needing MRI in radiology had to leave the NICU under the care of one or more NICU staff members. Once in radiology, the babies, snug in their incubators, had to wait their turn for the scanner, undergo the procedure and then be returned to the NICU. Altogether, the process could take as long as six hours.

Though the radiologists were happy with the babies’ images, the team knew there had to be an easier way to acquire them. MR scanning should be performed on the babies’ schedule, not the radiologists’, and the logistics of moving the babies needed to be streamlined to reduce risk to the babies. That’s when the hospital decided to assemble a team of engineers, physicists, radiologists and neonatologists to create a new MR scanner designed specifically for the hospital’s smallest patients. They bought two small, 1.5T superconducting magnets designed for orthopedic use from GE and rebuilt them as miniature general-purpose MR scanners with all the functionality found in state-of-the-art large-bore MR systems. Now, the baby scanner is located right in the NICU, and the scanning process, including patient transport to and from the scanner, takes only an hour and a half.

“Premature babies are the last class of patients that have not had the benefits of MR,” says Charles Dumoulin, scientific director of the Imaging Research Center at Cincinnati Children’s Hospital, and leader of the team that designed and built the new scanners. “Because the patients are so small and are in a very different stage of life, this is an opportunity to revisit everything we know about MR.”

What Dumoulin and the Cincinnati Children’s team did for neonates is representative of a larger trend in MR and health care in general: making care more patient-specific, no matter the patient and no matter the disease. New scanner technology is made to be comfortable and adjust appropriately when scanning challenging parts of the body like the abdomen or the breast, and for complicated diseases like brain tumors and schizophrenia.
1(current)
2
3
4
5
6
7