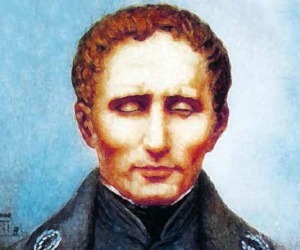 Some have the good fortune to ease into greatness without experiencing adversity, but it’s those who strive and succeed to overcome challenge that often offer the greatest inspiration.

Louis Braille belongs to the latter group and his hardship and the solution he created has helped to illuminate the darkness some have to live with every day.

Braille was born in Coupvray, France, on Jan. 4, 1809. He was the son of a harness maker and his father’s vocation tragically played a role in the accident that would befall Braille at an early age. It was at the age of 3 that he suffered an eye injury while playing in his father’s shop with an awl (a sharp tool his father used to make holes in the leather saddles and harnesses). Even though his parents sought the best care available at that time, both his eyes became infected due to the injury and by the age of 5, Braille had totally lost his vision.

In 1914, there was little a blind person could do to gain an education except depend on their hearing and memory. Although they realized their son would be at a distinct disadvantage, Braille’s parents still wanted him to have the opportunity to get an education. He was enrolled in the village school and worked hard, listening to instruction. He also showed himself to be a talented musician, learning to play the organ, a talent he would enjoy throughout his life. At the age of 10, Braille was awarded a scholarship from the National Institute for Blind Youth in Paris.

While he was at the National Institute for Blind Youth, he attended a demonstration by Charles Barbier, a retired artillery officer, where he explained and shared a system he had created to pass messages among the battlefield troops at night, which could be read without the use of a light. His system used embossed dots to represent sounds, since the majority of the soldiers serving under him couldn’t read standard writing even with a light. While the military wasn’t impressed with Barbier’s system, Braille was. At that time, blind students could only read text by tracing raised letters with their fingers, which was incredibly slow and challenging, resulting in few actually learning to read in that way.

Braille took Barbier’s idea and spent all his free time, working night and day over the course of three years, to refine it, puncturing paper to create the needed texture. By 1824, he had his writing system. Braille’s system used six dots, arranged in a variety of ways, to create letters and then contractions of words in order to make reading by touch faster. He also adapted his system to create musical notation.

By 1826, Braille had become a teacher at the school where he developed his print form for the blind. Three years later, he published a paper on the system and in 1837, he published a three-volume Braille version of a history book that was in wide use at the time.

Braille’s code expanded far beyond his native France and the French language. Today, it has been adapted for use in nearly every language currently used. But Braille wouldn’t live to see the entire breadth of use for the system named after him. By his early 40s, he was gravely ill with tuberculosis, succumbing to the disease on Jan. 6, 1852, just days after turning 43. A century after his passing, his body was moved from its initial resting place and interred in the Pantheon. His hands, however, those incredible tools that once punctured a series of raised dots into paper to bring the written language to millions, remained in the village of his birth.