“Instead of the capture layer being adhered to glass, it’s being adhered to film technology,” said Rob Fabrizio, director of strategic marketing, digital radiography and women’s health at FUJIFILM Medical Systems U.S.A. Inc. “Glass is what makes detectors fragile and more bulky because we have to reinforce the detector … We’re making the detector a lot less fragile and we’re not sacrificing image quality.”

At less than 4 pounds, the detector is 40 percent lighter than the previous generation, D-EVO II, and the lightest in the world, Fabrizio said. It’s for portable or in-room use.

“The most advantage is going to come from portable use where it’s getting banged around and put directly under the patient,” Fabrizio said.

In mid- to late-2020, the company is also planning to release the CALNEO Dual detector, a dual capture layer detector in a portable 17-inch-by-17-inch design. 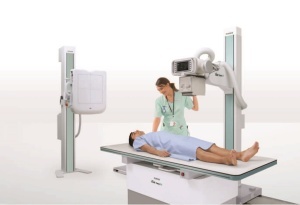 Fujifilm FDR Clinica-X
“It allows us to capture a single patient image at different layers,” Fabrizio said. “We’re able to separate out bone from soft tissue and generate three different images. In a standard chest X-ray, you can separate out the bone and better see a spot in the lung field that could be hidden by the ribs. If it disappears in soft tissue image it’s likely calcified, and not cancerous. For patients with a known spot on their lung, this can also be an easier way to track it. It’s significantly faster, lower dose and lower cost than traditional imaging, such as CT, for that type of exam.”

Fujifilm is also releasing three new radiography rooms, two of which will be showcased at RSNA.

The FDR Clinica-U is a compact single detector U-arm system for orthopedic practices and where space and power requirements are limited.

“This is a simple, cost effective way to install DR with a single detector positioning system,” Fabrizio said.

The tube stays directly aligned with the detector at all times and the system bolts to floor, so it doesn’t require ceiling prep.

The FDR Clinica-X is a mid-range overhead system for general radiography and ER. It has an overhead tube system, chest stand and table. The room will have the ability for stitching and auto positioning with later releases.

“It’s a general grab and go type of room,” Fabrizio said. “There’s a lot more focus toward having advanced features in the mid-range and on the low-end rooms. These new rooms are targeted as more cost-effective solutions without sacrificing the latest in functionality or performance.”
1
2
3
4(current)
5
6
7
8
9
10