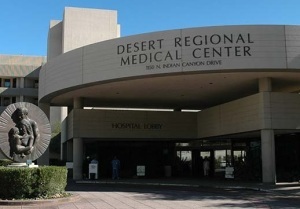 "Providers that bill for unnecessary services and devices contribute to the soaring cost of healthcare," said assistant attorney general Jody Hunt of the Justice Department's Civil Division in a statement."The Department of Justice holds accountable those providers that impose unnecessary treatments upon patients and pass the inflated costs on to federal health care programs.'

A lawsuit former Desert Regional employee Michael Grace triggered the False Claims Act action. He got $240,789 as his share of the settlement.

“We have reached an agreement with the Civil Division of the U.S. Department of Justice to settle a qui tam lawsuit for approximately $1.4 million related to a portion of cardiac loop recorder devices implanted from 2014 to 2017 at Desert Regional Medical Center. "We stand behind the efforts of our team — our hospital and physicians identified and took steps to address this matter prior to the filing of the lawsuit and remain committed to full compliance with all federal healthcare program requirements.” according to a statement from Tenet spokesperson Todd Burke.

The procedures involved monitors known as loop recorders, and took place from 2014 to 2017.

“Invasive medical procedures, such as implanting heart monitors, are not without risk,” stressed Timothy B. DeFrancesca, special agent in charge for the Office of Inspector General of the U.S. Department of Health and Human Services, adding that when unneeded procedures, as contended in this case, are performed, “people in government health programs are put at needless peril, and taxpayers end up with the bill.”

This is not the first time a Tenet fine has been in the news. In 2016, it was slammed with more than $513 million in fines to resolve criminal charges and civil claims related to a kickback scheme involving patient referrals for expectant mothers.

“Tenet cheated the Medicaid system by paying bribes and kickbacks to a prenatal clinic to unlawfully refer over 20,000 Medicaid patients to the hospitals. In so doing, they exploited some of the most vulnerable members of our community and took advantage of a payment system designed to ensure that underprivileged patients have choices in receiving care,” John Horn, U.S. attorney of the Northern District of Georgia, said in a statement at the time.

In either case this left them “with the false belief that they could not select the hospital of their choice,” according to the government.

Georgia Attorney General Sam Olens said at the time that, “through this scheme, Tenet defrauded the Georgia Medicaid program by hundreds of millions of dollars.”