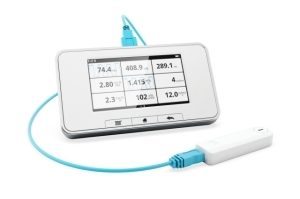 If you showed the device to someone on the street, they would probably mistake it for something they could pick up at BestBuy. About 6 inches long and weighing just over a pound, it has the elegant, slim curves and shiny metallic facing of an Apple product, and the no fuss commitment to minimalism that characterizes modern industrial design: only three buttons are visible, one of which is the “home” button illustrated by the silhouette of a house so familiar to owners of Android phones.

At a quick glance, it might look like a new kind of tablet computer, the latest iteration of an iPad, but it’s not. Its target audience is not everyday consumers, it does not stream Netflix videos and is not cheap by home electronics standards. Although the public will never use it, it does, in its way, protect their health, and helps ensure doctors are able to diagnose illnesses and save lives. The device, called the RaySafe X2, is an X-ray quality assurance tool, used by medical physicists, state health department inspectors and imaging technicians to ensure radiography machines in hospitals and clinics are working properly and emitting safe doses of ionizing radiation. And its sexy modern looks, developed by a Swedish design firm, are no accident.

“Consumers have the same high expectations for the devices they use at home and at work,” says Kelly Fitzgerald, a marketing executive with RaySafe, the Billdal, Sweden-based company that sells the device and which claims to be the largest X-ray quality assurance equipment manufacturer by annual sales. “There is a convergence between the personal and the professional in that nobody wants to go to work and use a device that seems archaic in its design and function.”

Aesthetics and ergonomics are only part of the story, however. Hospitals’ biomedical departments are facing new pressures to contain costs and increase workloads. And perhaps most importantly, the spike in hospital consolidations could profoundly change how some biomeds work. As a result, companies that design biomedical testing equipment, from X-ray QA tools to patient monitor simulators and IV pump analyzers, are looking to make their devices cheaper, smaller and easier to use.

Coming together
Hospital consolidations last underwent a boom in the 1990s. Partly as a consequence, about 650 integrated delivery networks or health systems make up nearly 70 percent of patient care in the United States, according to Rob Reilly, chief marketing officer with GE Healthcare. But another growth spurt is happening.
1(current)
2
3
4
5
6