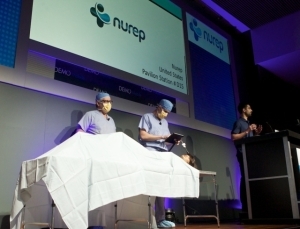 But the days of having a sales representative physically present in the OR may be coming to a close.

"Hospitals are looking for more cost savings and clinical effectiveness, and as a result, hospitals are looking for ways to get sales guys out of the hospitals who are influencing the purchasing decisions," Paul Schultz, CEO of Nurep, told DOTmed News. Nurep recently launched a HIPPA-compliant iPad-based platform for medical device companies that offers on-demand virtual device support when it's needed.

Medical device companies are looking for a new way to do business too. Many have been cutting staff in an effort to save money, especially as hospitals experiment with different approaches to handling suppliers as a result of health care reform. According to information compiled from Nurep, employing a medical device sales representative costs a company roughly $350,000 a year. In addition, these sales representatives must undergo an extensive credentialing process to gain access to the OR, which costs money too.

Schultz speculates that the 2.3 percent excise tax for medical devices included in the health care reform law could also contribute to device companies tightening their belts.

With pacemakers, for example, a sales representative might assist in the placement of the leads. With hip replacements, an orthopedic sales representative isn't just standing in the corner of the room, instead they are studying X-rays alongside the surgeon and guiding the surgical team as they maneuver the device during surgery.

Dr. Terry Chang, associate general counsel and director of legal and medical affairs at the industry trade lobby AdvaMed, told DOTmed News that they believe health care industry representatives should only be in the OR at the request of the surgeon or interventionalist.
1(current)
2
3